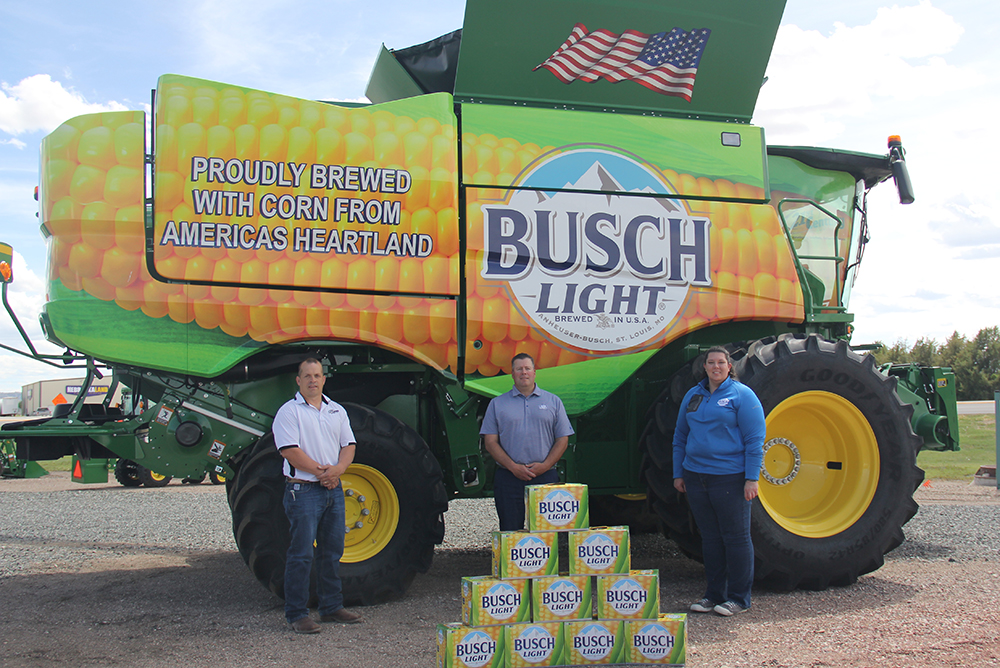 Anheuser-Busch Companies launched “Nectar of the Cobs,” on Monday, May 18. The company is packaging its Busch beer in a corn cob package, to raise awareness and assistance for farmers across the U.S.

The Anheuser-Busch is partnering with wholesalers across the Midwest, and among them is High Plains Distributing in Scottsbluff.

“They (Anheuser) have allowed us to partner with others in the community and promote the beer and our farmers,” said MaryKate Scheinost, general manager and co-owner of High Plains Distributing. “We saw it as a great opportunity to show our support for our corn growers, who are very essential to our economy.”

The company decided to partner with 21st Century in Scottsbluff and wrap a combine with the Busch corn cob promotion. Marketing Consultants in Scottsbluff did the wrap.

The combine is a vital piece of equipment for farmers for corn, dry edible beans, wheat, and other crops.

“The combine essentially is a factory on wheels,” said Terry Gass, 21st Century district manager in Scottsbluff. “If the combine doesn’t perform like it’s supposed to, a lot of what the farmer did right earlier in the season is negated.”

The combine is parked at 21st Century off of Hwy 26, east of Scottsbluff. It will be used in demonstrations for any farmer interested in purchasing a combine, and be at community events.

Scheinost said the corn cob cases won’t be around long, as when they run out, they will be out.

Anheuser-Busch is donating a dollar for every case sold to the Farm Rescue Organization, to support American farmers in need. The cases are being sold in Nebraska, as well as in  Iowa, Kansas, Minnesota, Montana, North Dakota, and South Dakota.

For more information on Farm Rescue and their services for farmers in need, visit farm resuce.org.