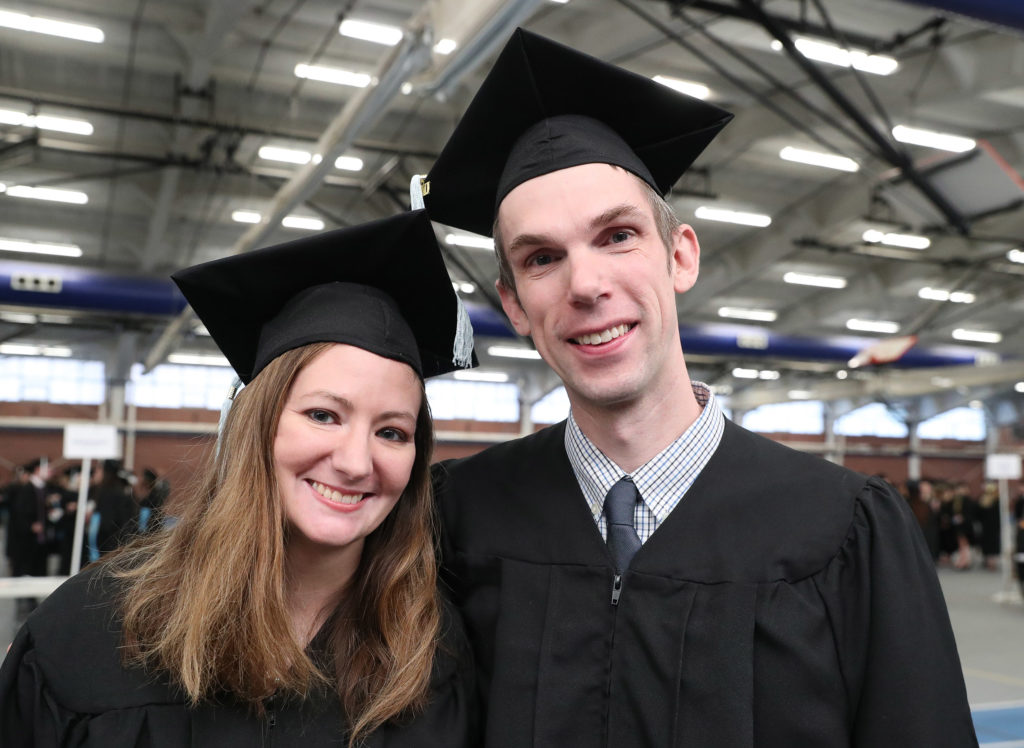 Sara and Brett Kluever received their Master of Education degrees in instructional technology Friday during UNK’s winter commencement. The Kluevers, who met at UNK before marrying in 2010, both teach fifth and sixth grades at Gibbon Public Schools. (Photo by Corbey R. Dorsey, UNK Communications)

Brett and Sara (DeWyke) Kluever first met 11 years ago on the University of Nebraska at Kearney campus.

They didn’t know it then, but the trombone player and track athlete from Union, Iowa, and the flutist and sorority sister from Columbus were about to start a Loper love story.

“He was dating somebody and I was, as well, and the same week we were both dumped on Facebook,” Sara recalled. “It was my birthday, too.”

A few days after the breakups, Brett and Sara connected outside class during a dance at Martin Hall. Sara’s sorority sisters encouraged her to socialize with Brett to “help her recover from that week.”

By the end of the semester, the two were dating as Brett prepared to begin student teaching at Central Elementary School in Kearney. He graduated in spring 2009, accepted a job teaching fifth and sixth grades at Gibbon Public Schools, and proposed to Sara on her birthday – one year after the breakups that brought them together.

“She was student teaching and getting ready for a wedding all in the same spring,” Brett said.

Sara, who student taught at C.L. Jones Middle School in Minden, earned her bachelor’s degree from UNK in spring 2010, and the couple were married that summer.

She also landed a job at Gibbon Public Schools, first as a second grade teacher before joining Brett in the fifth and sixth grades.

The husband and wife say they “balance each other out” as educators. His style is more structured and she takes a laid-back approach. Brett compares his wife’s classroom to a coffee shop, with couches, lamps and low light to create a relaxed mood.

“It’s really good to be able to bounce ideas off each other,” he said. “We’re able to get a lot more done because we’re honest with each other and help each other out.”

Sharing a profession is also a balancing act at home, where the Kluevers are raising 6-year-old daughter Julia and 3-year-old son William.

“There are times when we have to tell each other to stop talking about school,” Brett admitted.

“It’s either our biological children or our other kids,” Sara said of their conversations.

The Kluevers added another dynamic to their relationship when they both decided to enroll in UNK’s instructional technology master’s program. The online program focuses on integrating technology in the classroom and creating a modern learning environment that better prepares students for an ever-changing world.

Brett and Sara became “study partners” while working through the graduate program. They signed up for the same classes, shared textbooks and completed projects as a team.

On Friday, they walked across the stage together to receive their master’s degrees during UNK’s winter commencement. Ten family members were in attendance to help them celebrate. Sara’s grandfather made the trip from Texas and Brett’s mother returned from a teaching position in Kuwait to see the ceremony.

At Gibbon Public Schools, the fifth and sixth grade students threw the Kluevers a surprise graduation party on Wednesday, complete with homemade confetti.

“They were kind enough to wait until we had study hall, instead of in the middle of one of my classes,” Sara said with a smile.

“They’re super excited,” Brett added. “They wanted to pack up in a bus and come over to see us graduate.”

Brett, who mentors UNK teacher candidates and hosts students during their field experiences, was inducted into UNK’s Academy for Teacher Education Excellence in 2017. His parents and sister are also UNK alumni.

“There’s a reason why I wanted to stay close to Kearney,” he said. “I love the Kearney campus. I take my kids here all the time to go to events.

“My kids will probably be Lopers, and I’ll be a Loper for life.”