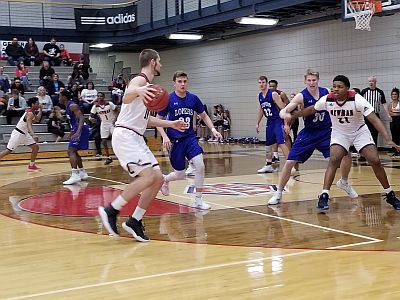 In its’ first-ever trip to Fugate Gym UNK was short-handed as leading scorer and rebounder Morgan Soucie (16.2 points & 6.2 rebounds per game) was unavailable due to injury. The Loper bench responded in a big way to the tune of 22 points and four rebounds with Bellevue redshirt freshman Cedric Johnson having 11 points, seven boards, three assists and two steals in his second collegiate start.

“I’m very proud of them. They found a way to win another nail-biter …. it seems like that’s all we play. Obviously it wasn’t pretty but I think sometimes the uglier it is the better we like it,” UNK head coach Kevin Lofton said. “We have to make it ugly without Morgan. That’s a lot of points and toughness we’re missing there. He gives us that extra confidence that if things get tight we have a guy we can throw it to that’s probably going to get buckets.”

UNK led for most of the night and by as many as nine points but NU used a 13-4 run to grab a 63-62 lead with 1:44 to play. The spurt was capped with a steal and dunk by Jet senior star Marshawn Blackmon who finished with 29 points.

“A lot of different guys stepped up. In the first half RJ, Austin and Cedric did a really good job for us and then some of that continued in the second half,” Lofton said. “Blackmon is a beast. He’s hard to keep off the glass but we held our own for the most part. ”

Bellevue senior forward AJ Jackson made a shot in the lane to give the Lopers the lead back but NU rebounded an ensuing shot attempt and that led to two free throws. However senior Juwan Davenport missed the first one and made the second to keep things tied at 64 with 57 seconds left.

Jackson went barreling down the lane, faced a lot of contact and missed a runner that was rebounded by Newman. After a timeout it was time for Pair’s heroics. Near mid-court he intercepted a pass and went streaking to the basket. Fouled hard attempting a layup, he made the subsequent freebies. Pair (The Colony, Texas) came into the night as a 73% free throw shooter.

“That (steal) won the game for us. Without that who knows which way it goes. We went from being in the driver’s set to a dicey situation,” Lofton said. “He did a really good job defensively and he’s a really strong midrange player. That’s where most of his baskets came from.”

Everyone in the gym knew Blackmon would get the next shot and he did. However Iowa senior Kyle Juhl played tough defense and forced him to take a fade away 15-footer that hit the front iron. A scramble for the loose ball went Kearney’s way as Texan senior Chase Winchester bounced it off a Jet and it went out of bounds. With four tenths of a second left all UNK did was inbound the ball with a length of the court pass.

UNK won despite being minus six on the glass and going 10 of 18 at the line. The Lopers overcame that by having four scoring in double figures and tallying 21 points off of 15 NU turnovers. Jackson worked around foul trouble to have a team-high 14 points with Johnson making 4 of 9 shots. He was one of six Lopers to have a three in the win.

“Cedric was a couple of missed layups away from a perfect game. He guarded, didn’t turn it over, scored, had some assists,” Lofton said. “Really proud of our bench. It was big turnaround from Northeastern State where they outscored us 40-5. They came into tonight and did a much better job.”

Coming off the pine Pair and Alliance junior forward Austin Luger had 11 points apiece. Pair made four shots with Luger going 5 of 9 from the field. Pair reached double figures for a fourth time with this being the fifth such effort for Luger.

Blackmon, formerly of Division I Eastern Illinois, went 11 of 20 from the field (0 of 1 threes) and 7 of 7 at the line. He also supplied five rebounds (four offensive) and had six of NU’s turnovers. No other Jet was in double figures but eight were in the scoring column.

“Our team can take a punch. We’ve taken a lot of them throughout the course of the year and we’re in the midst of another one with Morgan being out. We’ve had some setbacks, been knocked flat on our backs but our guys get up and keep fighting,” Lofton said.

UNK is at UCO at 3:30 on Saturday. The ‘Chos have won three in a row to now be in a two-way tie for eighth place in the standings. 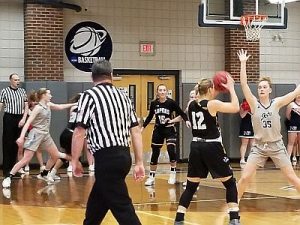 “It was self-inflicted. Fourteen point lead, 10 for 18 at the line, got a technical, lost our composure. No one to blame but us,” UNK assistant coach Devin Eighmey said. “Credit them for battling and Potter’s game winner was a tough shot.”

In a game where the Lopers led for 35:11, NU moved ahead 64-63 with 4.1 seconds left as 5-5 junior guard Michaela Mack converted a three-point play. The Jets were short on a wide open three from the right corner but Mack grabbed the loose ball in the lane and sank the shot and then the freebie. She came in at 55% from the line on the year. Newman finished 17 of 21 from the charity stripe with UNK 10 of 18.

“In the first half they were playing an unconventional lineup and we fouled a three pointer shooter twice. One for three (free throws) and another for an and-one. That’s seven points,” Eighmey said. “We gave up nine points on o-board threes and they had two players (Potter and Madison Bimbaum) score 22 of their 31 first half points. We let the (26-12) lead go away by playing undisciplined basketball.”

After back-to-back timeouts, UNK setup for a shot but point guard Haley Simental (Pueblo West, Colo.) was grabbed before any time came off the clock. Limited to 16 minutes due to illness, she sank both free throws to briefly give the Lopers the lead back, 65-64.

Everyone in Fugate Gymnasium knew the ball would go to Potter, one of the MIAA’s top scorers. With her team down 60-55 with 1:50 to play she hit two deep threes from the left wing to make it 62-61 by the 36 second mark. On the winning play Potter got the ball in the left corner, beat a trap by stepping through two defenders and hit a runner right before entering the lane.

UNK did have a chance to pull off a miracle but wasn’t credited with a shot attempt before the buzzer. South Dakota freshman Trinity Law was setup for a long three.

“We didn’t play well but give them credit. They made the play at the very end that won them the game,” Eighmey said. “Welcome to the best Division II league in the country. Little stuff can get you beat.”

Potter, averaging just under 17 points, finished with 23 on 7 of 21 (4 of 11 threes) shooting. She had 14 after the break including eight in the fourth quarter. Next six-foot freshman forward Madison Bimbaum went for a season-high 16 thanks to seven free throws and three treys with fellow reserve Brooke Haney having 11 points and nine rebounds. This pair came in combining for 10 points a night.

Newman, besides the solid free throw shooting, grabbed 11 offensive rebounds, sunk nine threes and held UNK to a 5 of 17 effort from behind the arc. The Lopers did out shoot NU by a 43-34 percent margin but three missed freebies in the final 1:50 proved costly.

“Not all is lost. We’ll have to regroup and try to finish off this road trip one and one,” Eighmey said.