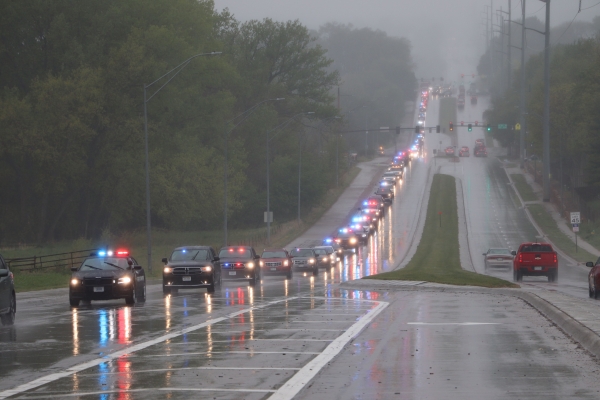 Omaha, Neb. — The Nebraska State Patrol on Wednesday honored the life and service of Lt. Craig Loveless #172, who passed away on March 27, 2020 after a lengthy battle with cancer. Lt. Loveless served the state of Nebraska in numerous capacities during his 33-year career with NSP.

Lt. Loveless’ family chose to delay his funeral service until today so that more family, friends, and colleagues could attend than under the previous 10-person limit for gatherings. Today’s service, held at Lifegate Church in Omaha, adhered to social distancing guidelines with minimal attendance, but was live-streamed so that the hundreds who wished to attend could view the service and pay their respects.

Many who could not attend due to social distancing guidelines were able to participate in a procession between the church and cemetery. The line of vehicles in the procession covered more than one mile from beginning to end.

“Craig’s impact on our agency, and more specifically the people of the State Patrol, will be felt for generations to come,” said Colonel John Bolduc, Superintendent of the Nebraska State Patrol. “He was a leader and mentor in the truest sense. His dedication to service and tenacious desire to help others will serve as a model for all Troopers and others privileged to know him.”

Lt. Loveless #172 joined NSP in 1987 and started his career in the Patrol Division, stationed in Omaha. In 1994, he transferred to Investigative Services and spent several years representing NSP on the Metro Area Fugitive Task Force. In 2005, Loveless was promoted to Sergeant at the NSP Training Academy in Grand Island, where he served for nine years.

While Loveless was instructing at the Training Academy, roughly 25 percent of all current NSP Troopers went through basic recruit camp. He also served in SWAT for 20 years and was the Special Operations Coordinator during his time in Grand Island. In 2014, Loveless was promoted to Lieutenant for the Patrol Division in Omaha, where he served for the rest of his career.