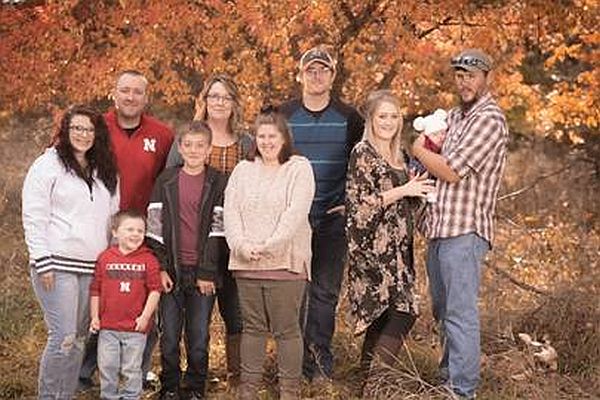 Some dreams are worth the wait.

That’s how Cynthia Huhman, of Merna, feels about finally earning a college degree.

Huhman is the recipient of an Associate of Applied Science degree in Business with emphases in Business Administration and Marketing, as well as a leadership certificate, from Mid-Plains Community College.

“It feels so amazing,” Huhman said. “If I can do it with all the obstacles I faced – anyone can.”

Huhman started out as a traditional college student. She began taking business classes from MPCC as soon as she graduated from Anselmo-Merna High School in 1986.

“Then life hit,” said Huhman. “I got married and started a family right away. I had a baby on Christmas Day of my first semester. I continued taking classes through the following spring, but it was just too hard. I decided I couldn’t do it and took some time off.”

By the age of 27, Huhman had two children and her marriage had ended in divorce.

“I still wanted that degree,” Huhman said. “I knew I needed to do something for myself.”

She began driving to MPCC’s campus in North Platte to take more classes.

“As a single mom with two little kids, it just didn’t work out,” Huhman said. “I quit again and just focused on raising my family.”

Two years later, she remarried and started over with two more children.

“That marriage ended in divorce as well,” Huhman said. “I decided I was going to try for a degree again so I would have something to fall back on. Over the next several years, I took one class at a time. I couldn’t travel back and forth to North Platte with the kids at home, so I attempted classes online with dial-up Internet. That, too, was unsuccessful.”

Over time, the Internet improved, but Huhman couldn’t always afford it. She would check her assignments at the radio station where she worked, then after work, would put the kids to bed and drive six blocks to her parents’ house to send assignments through her parent’s Internet.

“I would also take any classes I could at the Broken Bow Library,” Huhman said. “Thank goodness we now have a campus in Broken Bow. If not for that, I don’t think I ever would have finished my degree.”

Huhman started taking classes at the campus as soon as it opened in 2011.

“I was still in this mindset of not wanting to take out student loans,” Huhman said. “I didn’t want debt that I might not be able to pay off, and I couldn’t afford to take anything extra out of my paychecks. So, I would save my tax returns and use them for classes. My education was always based on how much I had saved up.”

Her course load consisted of one or two classes per year.

“I finally decided I could do two classes at a time and still care for my kids,” Huhman said. “Because my first attempts at college were a failure, my GPA was really low. But, as my GPA went up, and I saw how I could get those As and Bs, I was like, ‘Wow. I can do this’.”

It was her children who inspired her to pursue college full-time. Her oldest son has a master’s degree in education, and her oldest daughter has degrees in public relations and massage therapy.

“My oldest son has Tourette Syndrome,” said Huhman. “My oldest daughter had some learning disabilities, and my third child is developmentally disabled. They’ve had all these challenges, and yet, they’ve succeeded. I always told them to pick themselves up and keep going. I couldn’t preach to them and not do it myself.”

In January of 2019, Huhman’s daughter told her that she would take college classes with her.

“My daughter basically said, ‘That’s enough screwing around. Everyone else has student loans. You can, too’,” said Huhman.

Kaci Johnson, MPCC Broken Bow campus administrator, made sure Huhman was not only signed up for the classes she needed, but also registered for FAFSA and student loans.

“I knew that if I took classes full-time last spring and all of this year, I could be done,” Huhman said. “This semester, Kaci told me that with just one more class I could also get a leadership certificate. I was already at 15 hours, and I didn’t think I could do it. But, Kaci encouraged me and I signed up late. I carried 18 credit hours and got straight As.”

“I know there were people who thought I was just playing in pursuing a higher education,” Huhman said. “I wasn’t playing.”

Her accomplishments didn’t fully sink in until she read her name on the commencement list posted on MPCC’s social media channels.

“I saw that someone had shared the post, but it didn’t dawn on me that I could be on it until three hours later,” Huhman said. “I went back, looked at the list, found my name and bawled all afternoon.”

Now that she has an associate degree, Huhman is considering the possibility of earning a bachelor’s degree and maybe even more.

“I’m 52, I’m not dead,” Huhman said. “There are always things out there to learn. I now consider myself to be a lifelong learner. I will probably never stop.”

More than anything, she hopes she has served as an example for others, and especially her children, that anything is possible if you’re willing to work for it.

“I don’t want anyone to feel sorry for me,” Huhman said. “This was just my path. I made some bad decisions in life, but I couldn’t give up because my kids were watching. Everything I did, I did for them, and education is never a bad decision.”