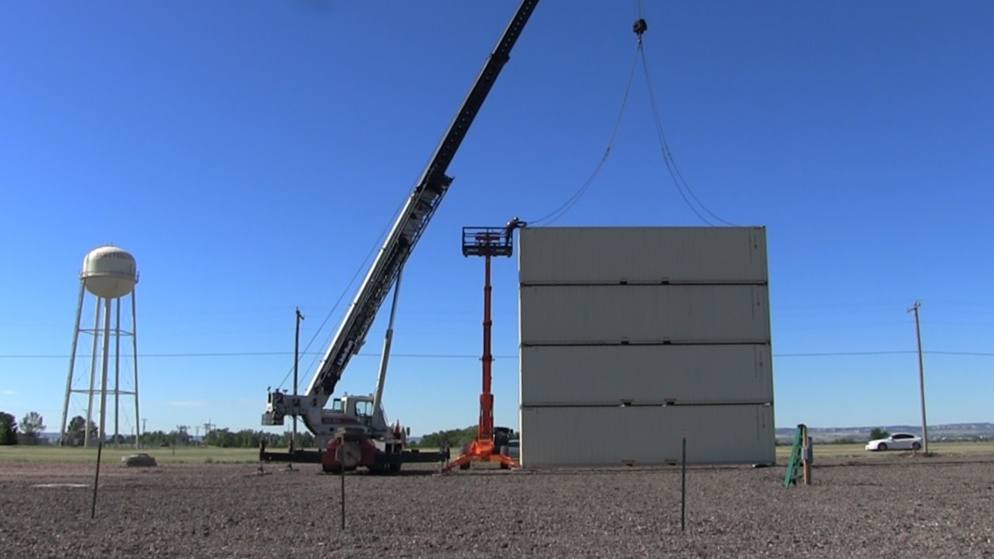 A new era begins Friday for Scottsbluff’s Midwest Theater with the much anticipated opening of the Midwest SkyView Drive-In Theater Friday, located across from the Western Nebraska Regional Airport entrance, just north of the water tower.

After last Saturday’s wind storm blew over the temporary screen used for their “pop-up” outdoor theater at Legacy of the Plains Museum, final work was being done on the site Wednesday morning as four large shipping containers were stacked to create the screen space at the new permanent airport location.

Midwest Theater Director Billy Estes told KNEB News everything was coming together for this weekend’s opening. Estes said it’s been a week of challenges, with their other screen going down and losing that screen material. But he said they had a second backup screen they had used before the permanent screen they had put up at Legacy of the Plains.

Estes says the parking lot layout was different than a traditional drive-in with spaces made a little larger so families can get out of their cars and have their own space to enjoy while maintaining social distancing.

The grand opening was delayed by a week to June 12, from its original opening date of June 5, due to unforeseen construction delays.

One free bag of popcorn per vehicle on opening night to the first 60 cars, sponsored by Chris & Michelle Lambert.

The gate will open each night at 7:30 pm, with the film starting approximately 30 minutes after sundown.

The new venue will offer number parking for up to 165 cars with additional room for overflow as needed, with built-in social distancing measures in place that will allow families to sit outside in their own space. The concessions offerings will be expanded to include hot concessions items with two ways to order, drive-thru concession, and online ordering with car-side delivery. And yes, portable toilets will be available!

If you or your business is interested in supporting the Summer Movie Madness, or free community admission on a regular weekend night, or free popcorn, please contact Billy Estes Executive director for more information Billy@MidwestTheater.com.