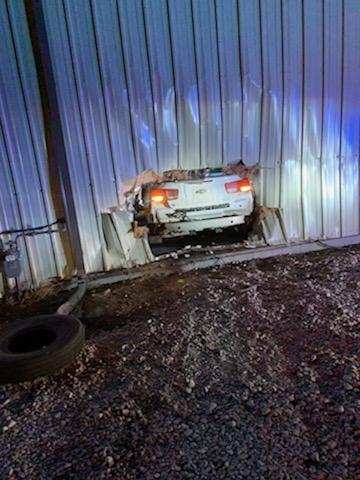 A Minatare woman was issued a citation for driving under the influence after driving a car into a building just southeast of Scottsbluff Saturday night.

Scotts Bluff County Sheriff Mark Overman says in a release that at 10:03 p.m., the  County Communications Center received a report of a vehicle striking the Nebraskaland Tire facility east of Scottsbluff at 3588 Immigrant Trail Drive, adjacent to Highway 26.

Overman says the investigation revealed the car driven by Dawn Cline, 45, of Minatare, was westbound on Highway 26 when the vehicle left the roadway to the left, crossing the median into the east bound lane, continued west hitting a median/intersection sign, going airborne for 68 feet before impacting a ditch and continuing for over 300 more feet before colliding with the side of Nebraskaland Tire.

Overman says Ms. Cline was able to crawl out of the vehicle and through the sheared tin building wall where she was immediately treated by Valley Ambulance personnel. Scotts Bluff  Rural Fire Chiel Paul Reisig tells Rural Radio News the driver and sole occupant was fortunate, in that the car hit the building between metal I-beam columns, and once inside was stopped by tire racks and stacks of loose tires.

Deputies cited Dawn Cline for Driving Under the Influence of Alcohol, Possession of Marijuana Less than One Ounce, and Possession of Drug Paraphernalia.