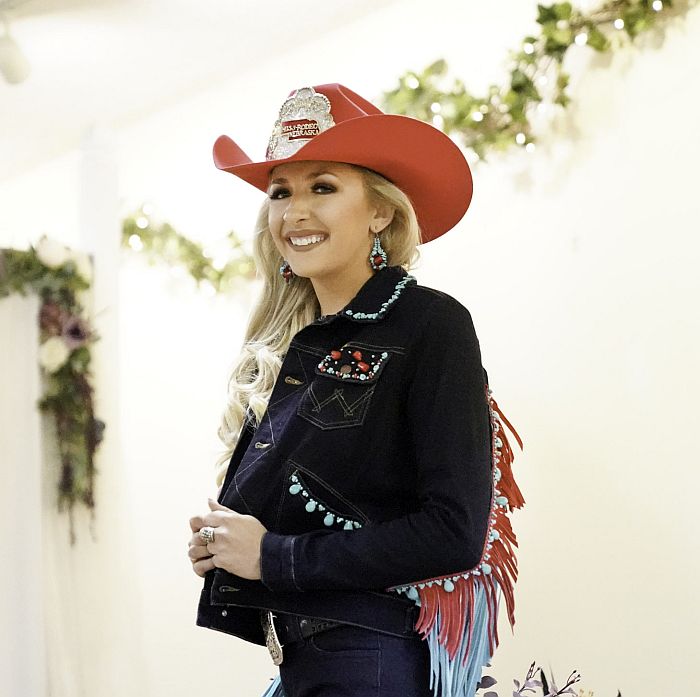 Courtesy/ Miss Rodeo Nebraska. Eva Oliver modeled one of the outfits for the Miss Rodeo America Pageant during her send-off celebration in October 2019 at the Haythorn Ranch at Arthur.

A year and a half worth of work paid off for a Merriman woman over the weekend.

“It was such a rush to make it to the Top 10 and then the Top Five on top of that,” Oliver said. “It blew my mind. It’s something I had always dreamed of, but finally being there was astonishing.”

Oliver spent a week in the Entertainment Capital of the World vying for the MRA crown alongside 27 contestants from across the nation. In addition to speech and written test, they competed in the areas of horsemanship, personality, appearance, photogenic and congeniality.

“Competing was so much fun and super relaxed for the most part,” Oliver said. “We had a great set of judges and the other girls really made my week so special and memorable.”

Oliver won a second runner-up buckle from Montana Silversmiths and about $10,000 in scholarship money in addition to a variety of smaller prizes.

“Eva worked really hard throughout the year, and it really showed in Vegas,” said Cindy Petersen, MRN Pageant chair. “Nebraska and the MRN Association are extremely proud of the job she has done, not just at the Miss Rodeo America Pageant, but also throughout her reign. She is an amazing young woman, and the future is very bright for her.”

Now that the pageant is over, Oliver plans to spend a year working while also taking online college classes in pursuit of a bachelor’s degree in marketing or sales. Her long-term goal is to go into the field of pharmaceutical sales in the animal industry.

Oliver was crowned Miss Rodeo Nebraska Lady-in-Waiting at the first performance of the Buffalo Bill Rodeo during the 2018 NEBRASKAland Days celebration in North Platte. She officially took over as MRN 2019 in January of this year.

Since that time, she has spent countless hours promoting Nebraska, the MRN Association, the sport of professional rodeo and the western way of life at schools, rodeos, parades and a variety of other events across the country.