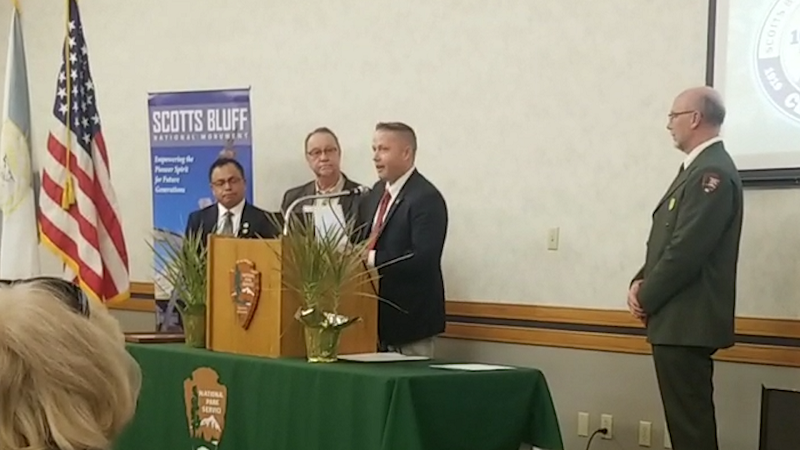 Several hundred filled a conference room at the Gering Civic Center Thursday night as staff from the Scotts Bluff National Monument celebrated the official 100th anniversary of the creation of the National Park Service facility.

Following reading of a proclamation by local mayors and chair of the county commission, those in attendance were treated to a presentation on the history of the monument in pictures, as well as ice cream and cake.

Superintendent Dan Morford thanked Ranger Kayla Gasker for her efforts coordinating the year-long celebration, as well as the entire community for their support. “it was really good to see that, and we appreciate that. But it also has given us a little bit of a feel for the next 100 years as we move forward,” said Morford. “We can still sponsor things and do things around town. Yes, we want to get people out to the Monument, but it has given us a different footprint to do some of these events that we have out in the community.”

Winning the photo contest was Adventure Photography, with a photo of a Pony Express re-ride participant on horseback with Eagle Rock in the background.

Morford tells Rural Radio News staff is looking forward to a spring grand re-opening of the Visitor’s Center, and they do have some ideas for future changes and additions at the monument, but he says he wants to hold those close to the vest for the time being.