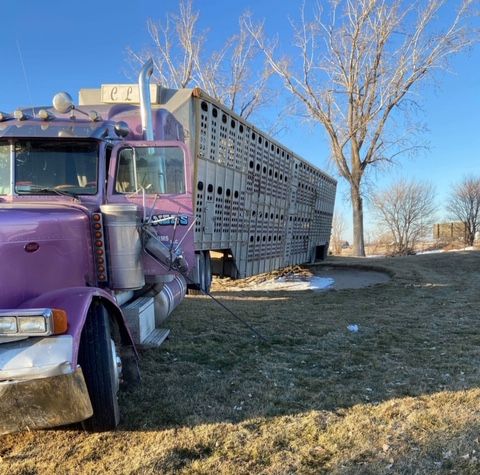 Courtesy/ Phelps County Sheriff's Office. A semi hauling cattle came to rest on a Holdrege golf course after veering from the roadway on Wednesday January 15, 2020.

Most of the cattle on a cattle truck accident in Holdrege were saved. It happened around 4:00pm Wednesday on Highway 183 on the northern edge of Holdrege. According to the Phelps County Sheriff’s Office, the truck slowly veered off the highway, went through a fence and came to rest on the Holdrege Country Club golf course. Holdrege Volunteer Fire Department transported the driver from the scene for injuries sustained in the accident. The truck remained upright during the accident but, Sheriff Gene Samuelson says the cause it had not been determined.

Sheriff Samuelson praised the work of the Holdrege Veterinary Clinic in making arrangements for off-loading the cattle and transporting them to the vet clinic. There were 34 head of fat cattle involved but, one was injured and later destroyed.