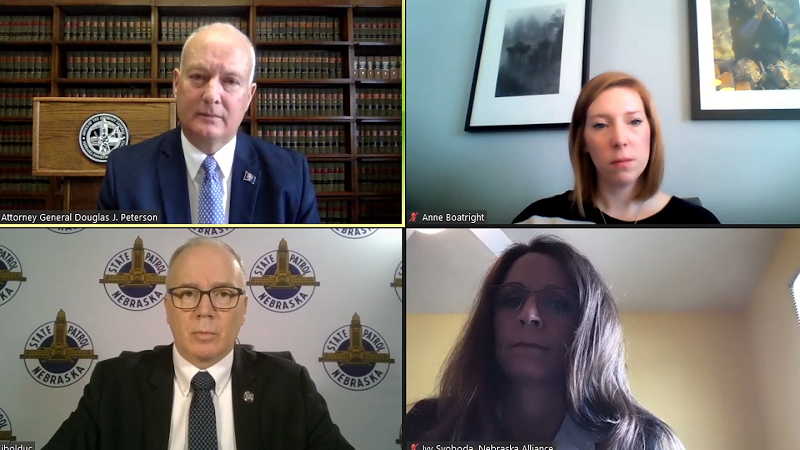 This month, the Attorney General’s Office partnered with the Child Advocacy Centers in hosting over one hundred law enforcement members from across Nebraska for the National Criminal Justice Training Center (NCJTC) two-day online training titled “Following the Evidence in Child Abuse and Child Exploitation Cases.”

“Protection of the most vulnerable in our state has been and will continue to be a top priority for our office,” stated Attorney General Peterson.

The Attorney General also announced plans for additional trainings in Nebraska to occur in 2021. Kerry Crosby, AGO Lead Child Abuse Investigator and Assistant Attorney General Glen Parks, Coordinator of the Nebraska Human Trafficking Task Force, will be traveling the state to train law enforcement on investigating child sexual assault and sex trafficking of minors. Their target will include as many as eight communities across that state outside of metro areas.

During the virtual news conference, Peterson said for law enforcement, one of the frustrating parts of investigating abuse and sexual assault cases involving children and adults was the general lack of victim awareness among the public. “It’s really key that we not ignore them. It’s not necessarily something that you can always answer with legislation,” said Peterson. “But there are a lot of dedicated law enforcement, child advocacy organizations and community supporters who understand that victims need to be recognized, and need to be supported.”

The Nebraska Sexual Assault Payment Program (SAPP) was created so victims of sexual assault would not have to pay for forensic medical examinations. The recent reports show the progress made over the last three fiscal years. Over the course of SAPP, 4,086 medical exam payments have occurred. In the 2019-2020 fiscal year, 43% of the medical exams were provided to children ages 0 to 12.

The recently completed Sexual Assault Forensic Kit tracking system website will create awareness and accountability around every single sexual assault kit within Nebraska. The system allows for kits to be tracked every step, from evidence collection to the prosecutorial process.