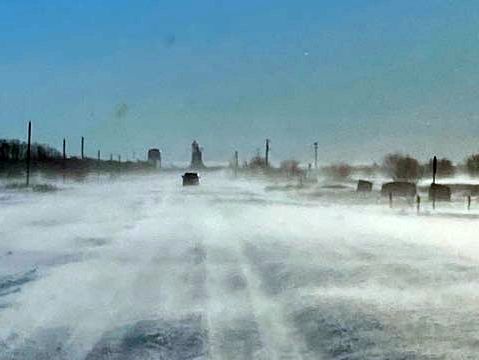 Lexington, Neb. — The Nebraska State Patrol (NSP) and  Nebraska Department of Transportion (NDOT) crews were working Monday  to reopen closed roads in central  Nebraska where more than a foot of snow fell in certain areas.

Efforts to reopen roads were hampered by the need to clear roads and ditches of vehicles involved in accidents and slide-offs.

“The high winds have been very, very challenging for us as the snow continued to fall and the drifts really become unmanageable on a lot of our roads. Thayer says, basically Custer County is part of the worst part of the district that we have going right now.” Thayer also mentioned on-going efforts to reopen I-80.

Thayer says to give an idea of the severity of the storm,  all 5 of the districts’ “blowers” were placed into service.  Thayer says “we don’t get our blowers, our big snow blowers out very often.”

Nebraska State Patrol Captain Tyler Schmidt told the Rural Radio Network that roads and ditches were being cleared of vehicles:

“Over the last 12 hours, I believe the last count was about 32 vehicles that were stranded in the ditches or parked in the snow and then we just have the Interstate that’s currently shut down (it’s been reopened) and NDOT is out there trying to get things cleared off and hopefully the sun will pop out this afternoon and we can open up the roads and get folks traveling again.”

Captain Schmidt urged motorists to check with Nebraska 511 for updates on road closures.

“Probably the biggest impact we’ve had is from the gusty winds…even though certain areas didn’t have a lot of snow…a lot of roads have been closed because of blowing and drifting snow…and we’ve had reports of up to 3 foot drifts across Highway 30 and I-80 is obviously having problems because it’s closed this morning.”

The National Weather Services says 15 inches of snow fell near Ansley and 13 inches fell in Broken Bow by Sunday afternoon.

Beda says other reports included 11 inches at Kearney, 9 inches in northern Buffalo county and approximately 4 inches in the Hastings and Grand Island areas. Beda says 40 to 45 mph wind gusts were expected Monday and he wouldn’t be surprised by gusts that exceed 50 mph at times.

A number of city departments are grappling with snow and blowing snow. The City of Kearney Street Division says a downtown Snow Emergency is in effect between Midnight and 6:00 a.m. on Tuesday, December 31, 2019.

As of Sunday afternoon, NSP said troopers performed 233 motorist assists and responded to 20 crashes during the storm