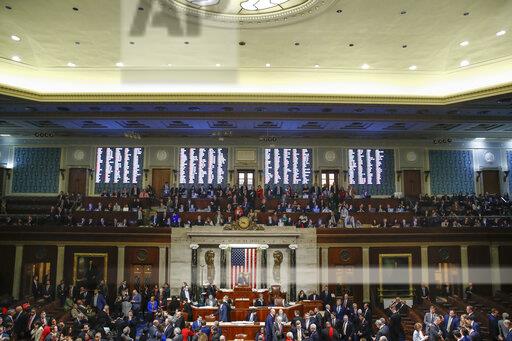 House members vote as House Speaker Nancy Pelosi of Calif., stands on the dais, during a vote on article II of impeachment against President Donald Trump, Wednesday, Dec. 18, 2019, on Capitol Hill in Washington. (AP Photo/Patrick Semansky)

“Tonight’s vote revealed that Nancy Pelosi’s Articles of Impeachment were simply a partisan power play by House Democrats,” said Gov. Ricketts.  “They have wasted countless hours and millions of taxpayer dollars trying to remove a duly elected president at the expense of the priorities of the American people.  I expect President Trump to be fully exonerated by the Senate.”

Congressman Jeff Fortenberry issued the following statement after the U.S. House of Representatives voted to impeach the President of the United States.

“I have been concerned since the beginning that this impeachment process has been driven by a predetermined verdict of guilty.  It’s unfair.  Now, any future president, Democrat or Republican, will have to worry that impeachment will be used as a blunt force political instrument,” Fortenberry said.

“The House has had its cathartic moment.  Maybe tomorrow, we can get back to work and pass a good, fair trade agreement with Canada and Mexico,” Fortenberry added.

“I stand opposed to impeaching President Trump. No law was broken. No high crimes or misdemeanors were committed. No impeachable offenses were committed. The Ukrainians received military aid a week before the law required—aid the previous administration refused to give. There was no investigation and President Zelenzky said he received no pressure from the Trump Administration…ever!

“Simply put, there was no quid pro quo. There was no crime. There is only the majority’s disdain for the President, and that is not an impeachable offense. The elections are in ten months, but the House Majority doesn’t trust the American people. Too many have said that impeachment is necessary so that President Trump is not reelected in 2020. That is shameful.

“Today’s vote sets a new precedent for America. In the years to come, the House Majority could use impeachment as a tactic to reverse an election and remove a president simply based on partisanship. Our founders feared this, and I strongly oppose this impeachment. I want my statement to be in the record for the end of time to show I was on the side of the Constitution… that I opposed the majority taking down a duly elected president who committed no crime… and that I defended the truth.

“I applaud the brave members of the House who voted to stand up to this criminal bully of a president,” Kleeb said. “Unfortunately, Nebraska’s GOP members of Congress — Reps. Don Bacon, Jeff Fortenberry and Adrian Smith — showed they were cowards by voting against the measure. They have put their party ahead of our country and Constitution.

“The survival of our democracy is at stake.Trump is a threat to our democracy and national security. Those who voted for the articles of impeachment are giving our nation a path to restoring the rule of law and defending our Constitution.”