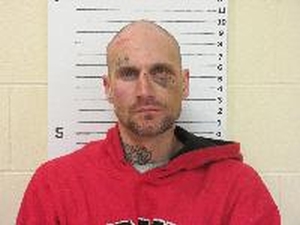 North Platte — Shortly before 6:00 p.m. on Monday, deputies with the Lincoln County Sheriff’s Office (LCSO) responded to the Kansas Point Campground at Lake Maloney on a report that a fugitive was in the campground.

37 year old Aaron Kirts was wanted in Lincoln County for Failing to Appear on a 2nd Degree Trespassing Charge.  The North Platte Police Department also had open investigations on Kirts along with 22 year old Alejandra Shirley, and they were wanted for robbery in that investigation. Both are residents of North Platte.

The deputies arrived, and located Shirley driving a vehicle with Kirts as the passenger. Shirley attempted to flee from pursuing deputies, however she lost control of the vehicle and hit a tree. Shirley was taken into custody, but Kirts fled into a nearby wood area. Shirley was incarcerated at the LCSO jail for robbery and flight to avoid arrest.

As several deputies searched the area for Kirts,  another vehicle, totally unrelated to the Kirts incident, entered the campground.  The deputies approached the vehicle and ordered the driver, 32 year old James Mitchell of North Platte  to get out of the car. The deputies observed controlled substances, marijuana and what appeared to be methamphetamine, readily visible in the vehicle. Deputies were also aware that Mitchell had a warrant for Possession of Marijuana, over an ounce.  The driver refused to get out of the car and tried to flee from the deputies. In an attempt to escape, the driver struck a deputy sheriff with his vehicle as well as a sheriff’s patrol vehicle. The deputy suffered minor injuries and was later treated and released that same night.  Fearing for their safety, deputies shot at Mitchell. Mitchell was disabled by the gunshots. Deputies rendered first aid, an ambulance was called to the scene and he was transported to Great Plains Health (GPH). Mitchell remains hospitalized for his injuries.  Mitchell will face additional charges related to this incident.

Law enforcement continued to search for Kirts throughout the night, and an alert citizen observed him on their property southwest of Lake Maloney and contacted dispatchers to report it. Kirts was taken into custody around  1:00 a.m.  Tuesday for the warrant, robbery, and resisting arrest and incarcerated at the LCSO jail.