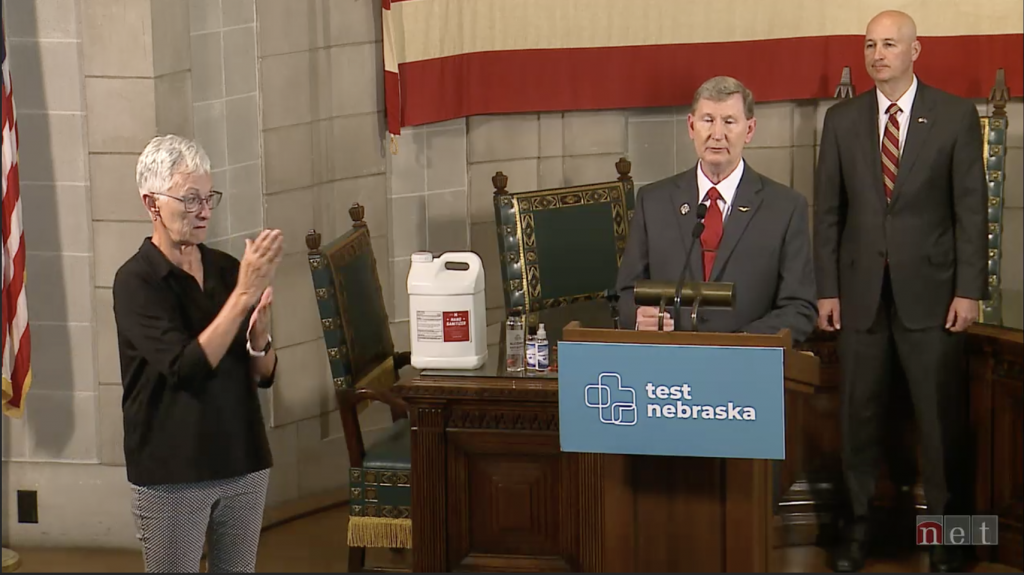 Back-to-school for University of Nebraska students will look different this fall with fewer students in classrooms, cafeteria take-out food and mandatory face masks.

Gov. Pete Ricketts and NU President Ted Carter announced during a July 21 press conference the university system’s plans for opening in five weeks. Nebraska’s four campuses and two-year technical college will have in-person classes. Depending on the course, there is also likely to be some online component.

“This will not be a normal year,” Carter said. “We are living in a pandemic. We have to learn how to live in a COVID-19 world.”

Contact tracing will be used to prevent outbreaks on campus. Dining halls will switch from cafeteria-style to take-out style, and there will be more cleaning. Masks are mandatory on campus and inside campus buildings.

The University of Nebraska of Medical Center has created the 1-Check COVID app that allows users to screen their symptoms, assess their likelihood of contracting the virus and decide whether they should seek testing. Students and faculty will be encouraged to download the app.

Nebraska is also hoping to bring sports back. The Big 10 announced that it will have a conference-only season for fall sports, including football. The MIAA, which includes the University of Nebraska at Kearney, chose to delay the start of fall sports. Carter, who wears a Huskers face mask from Chancellor Ronnie Green, said he is eager for the return of sports.

“I’m gonna remain optimistic that we will have sports this fall in the state of Nebraska,” Carter said. “I along with the rest of Nebraskans want to see sports back.”

Carter said that in-person college classes are crucial to maturation.

“You cannot get the same level of education through a Zoom call that you can get by physically being on campus,” Carter said. “Our role in higher education is maybe not as mission-critical as the food-supply chain or as hospitals or meat-packing plants, but we are certainly very important to the future of the state, the future of our economy and the future growth of Nebraska.”

Ricketts, who is the parent of three college students, said he is planning on sending his children back to school.

While campuses can ensure proper social distancing in classrooms, sports arenas and performing art centers, students socializing off-campus in large groups could present an issue. Carter said that since 80% of Nebraska students surveyed said they wanted to be back in-person, he believes they will uphold social distancing to ensure they can remain on campus. Requests from those wanting to live in university dorms were flat this year, he said.

“I know they’ll be motivated to do the right thing,” Carter said. “We have a mission to do and we should be doing it in-person,” Carter said.

Greg Adams, the Nebraska Community College Association executive director, said unemployment because of COVID-19 could lead to more people returning to community colleges to obtain a degree. Federal grants from the CARES Act will help invigorate this process, he said.

“We have these people who are unemployed, and we need to get them back in the workforce as quickly as can and maybe in a job that they’re feeling better about,” he said. “We’ll get them into these short-term training programs and get them into jobs.”

K-12 schools in Nebraska also represent a transmission risk because they are indoor spaces with high concentrations of people. Ricketts said if students cannot be spaced 6 feet apart in classrooms, he encourages wearing masks.

“Schools are probably the densest population that we have anywhere in our society,” he said. “It’s really going to have to be a building-by-building decision by the school districts about how they do social distancing and make sure we’re slowing the spread of the virus.”