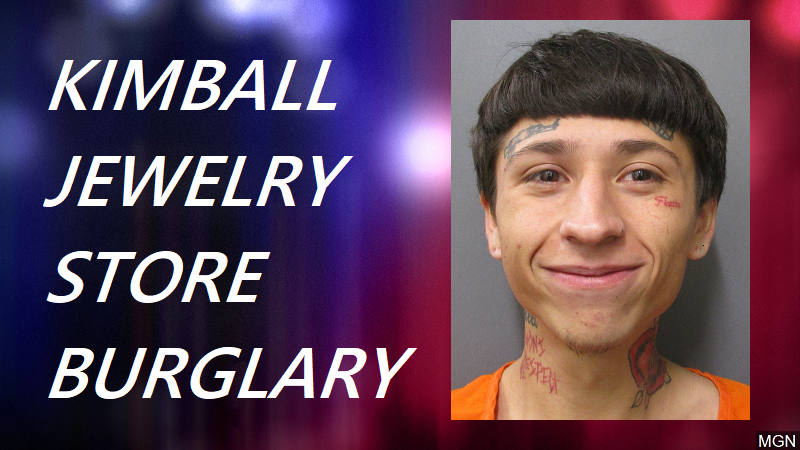 A 19-year-old man is facing charges following investigation of a break-in at a Kimball jewelry store this week.

A charge of burglary has been filed against Adrian Rodriguez after Kimball Police were called to Larsen’s Jewelry Wednesday evening just after 7:30 p.m.

In the arrest affidavit, investigators say a witness claimed two young males, both with dark colored hoodies and one with a neck tattoo, broke a window and took two items from a display. A second witness told police two individuals matching the description entered a house on North Chestnut Street, and during an interview at the residence Rodriguez told officers he had been at the house all day with his girlfriend.

During a second interview at the house about two hours later, the suspect told officers he didn’t know what was going on and they could search, while the girlfriend said the pair did leave the home to visit a sister and a friend’s house that evening, and they were wearing hoodies matching the description.

Rodriguez was taken to the Kimball Police Department for questioning, where he was positively identified by the witness who saw the burglary and arrested. During the interview, the defendant allegedly told officers he had taken several pills earlier in the day, and that he was on so many of them he was unsure of what he did or didn’t do.

Rodriguez was scheduled for his initial appearance Friday morning on the felony charge, which  carries a possible prison sentence of up to 20 years.

Deuel County Attorney Jonathan Steller has been appointed Special Prosecutor in the case. Kimball County Attorney David Wilson recused himself, as the jewelry store is a client of Wilson’s private law practice.