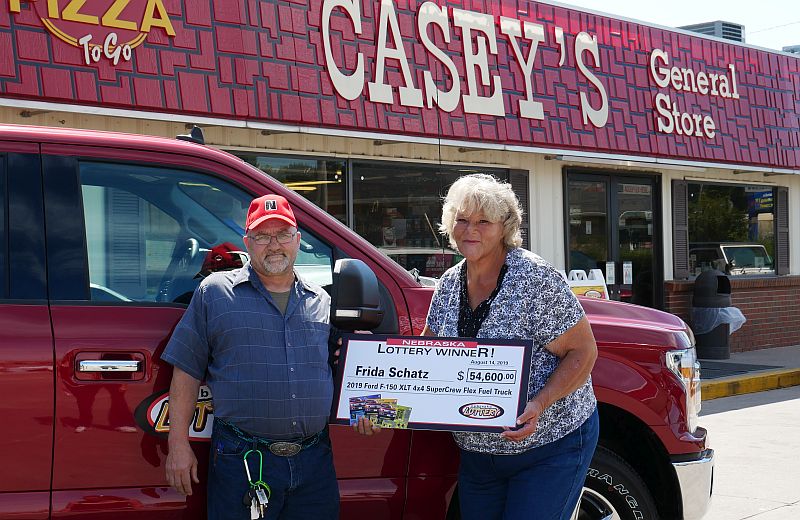 Nebraska Lottery officials presented Schatz with her truck on Wednesday, August 14 at Casey’s.

Schatz said that she doesn’t normally play Truck$ & Buck$, but decided to play after joking with the store’s manager about his new truck that looked like the ones being given away by the Nebraska Lottery.

Schatz bought her ticket and started to scratch it off on her way home when she discovered she’d won.

“I was going out and I immediately made a U-turn,” she said.

She brought the ticket back to Casey’s and, when she scanned the ticket, the whole store erupted in cheering, she said. A woman who was working in the kitchen came running out, thinking something must be wrong, she said.

Schatz said that she wouldn’t have even bought the ticket, but her brother had found $2 on the ground and gave it to her earlier that day.

The 24th edition of the Nebraska Lottery’s popular $2 Truck$ & Buck$ Scratch game features the 2019 Ford F-150 XLT 4×4 SuperCrew Flex Fuel truck as its top prize. Players have the opportunity to win one of seven Ford F-150 trucks as well as cash and Ethanol-enriched fuel prizes. The truck prize is valued at $54,600, which includes $1,214 for costs associated with ownership and state and federal withholding paid by the Nebraska Lottery of $2,730 and $13,104, respectively. The odds of winning the top prize in Truck$ & Buck$ are 1 in 300,000, while the overall odds of winning any prize are 1 in 3.09.