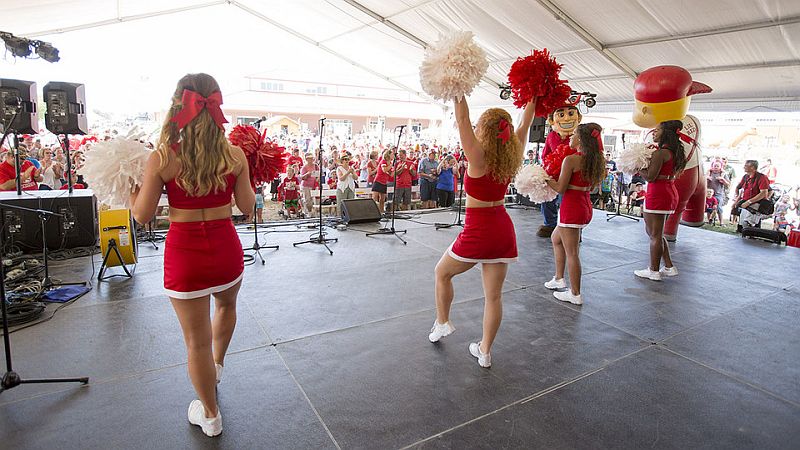 Craig Chandler | University Communication University of Nebraska–Lincoln celebrations during the Nebraska State Fair include an N150 pep rally on Sept. 1.

Lincoln, Nebraska, Aug. 15, 2019 — Visitors to the Nebraska State Fair, Aug. 23 through Sept. 2 in Grand Island, will have several opportunities to celebrate the University of Nebraska–Lincoln’s 150-year legacy of improving the quality of life for Nebraska and beyond.

The university will have an expanded presence at this year’s state fair, which is expected to welcome more than 300,000 people.

“The University of Nebraska–Lincoln and the Nebraska State Fair are longtime partners in education and leadership in our state,” said Kathleen Lodl, associate dean of Nebraska Extension and 4-H program administrator. “Every state fair is special, as we get to celebrate the success of so many youth, but this year’s fair is unique because we’re able to honor a really significant milestone in our state’s history.”

The fair will feature more than 10,000 4-H exhibits from 2,500 exhibitors representing all 93 Nebraska counties. Exhibits will encompass areas such as animals, food, clothing and textiles, robotics, computers, the environment, veterinary science, heritage and leadership.

4-H members will showcase their creativity and university pride at a stepping-stone exhibit celebrating the N150 milestone. Stepping stones were exhibited at county fairs this summer, and one stone from each county will be displayed at the Raising Nebraska building during the state fair.

Raising Nebraska will also host the N150 traveling exhibit. The exhibit features key moments in the university’s history and a computer kiosk that allows viewers to read pages from the commemorative book “Dear Old Nebraska U.” This is the exhibit’s 12th stop outside Lincoln in a yearlong tour across the state.

Chancellor Ronnie Green will host U.S. Secretary of Agriculture Sonny Perdue for a public town-hall discussion at 11:30 a.m. Aug. 23 in the Raising Nebraska building. The event is open to fair attendees. The secretary will take questions from farmers, agricultural stakeholders and others in the audience.

Other university celebrations during the fair include an N150 pep rally at 2:30 p.m. Sept. 1. Complete with the Cornhusker Marching Band, Spirit Squad and mascots, the rally will also celebrate the university’s longstanding connection to the people of Nebraska by honoring those who live on the land originally granted to help establish the institution.

Sports journalist and author Mike Babcock will give a special Nebraska Lecture at 1 p.m. Aug. 24 in the Raising Nebraska building. Babcock will look back over the past 129 years of Husker football. The talk is the seventh in the 2019 Nebraska Lectures: Chancellor’s Distinguished Speaker series, celebrating the university’s sesquicentennial. The talk will be streamed online and made available via podcast. Following the lecture, the Nebraska Alumni Association will host a reception for alumni and friends from 2:30 to 4 p.m. in the Nebraska State Fair Boardroom, on the building’s second floor.

A special display depicting 150 years of corn and millet genetics, highlighting the work of university faculty and staff, will be showcased at Raising Nebraska Outdoors throughout the fair.

Fans of the popular lawn-and-garden television series “Backyard Farmer” are invited to attend a live taping at 4 p.m. Aug. 26 in the Raising Nebraska building. A question-and-answer session with panelists will follow the taping. The episode will air at 7 p.m. Aug. 28 on NET.

For a complete list of N150 celebrations at the Nebraska State Fair, visit https://n150.unl.edu.