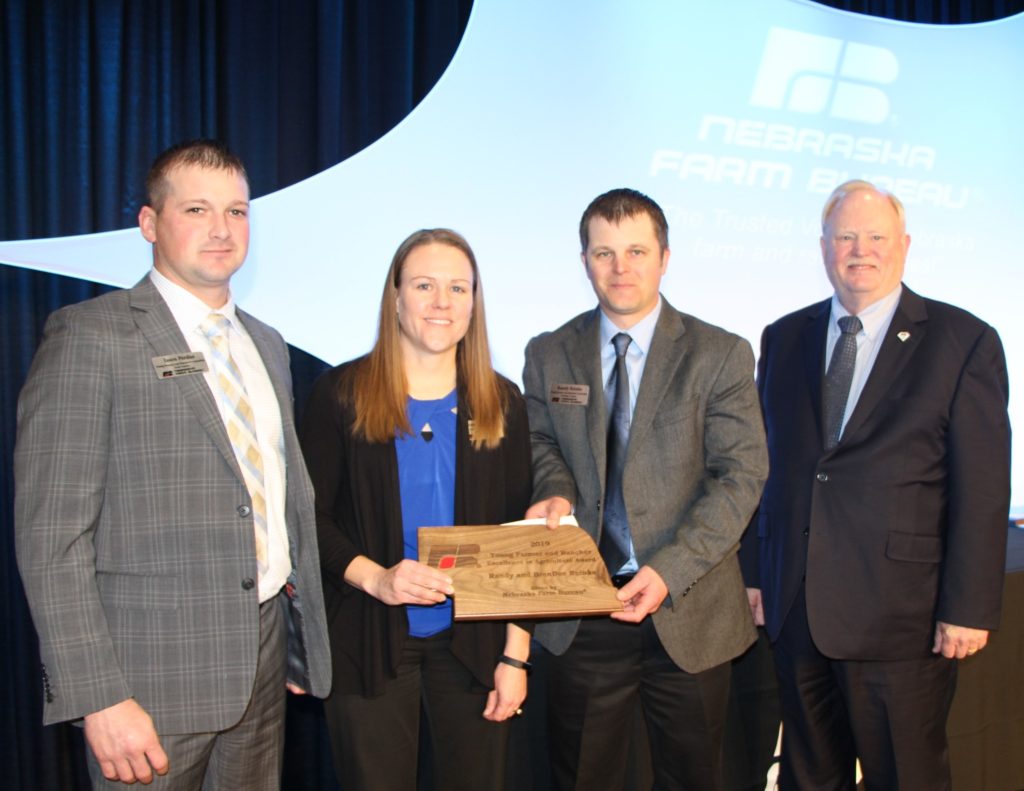 KEARNEY, NEB. – Randy and BrenDee Reinke of Neligh were named the recipients of the 2019 Young Farmers and Ranchers Excellence in Agriculture award. The award was given Dec. 10, at the “We Love our Members” luncheon during Nebraska Farm Bureau’s 102nd Annual Convention in Kearney, Neb.

Randy is the third generation involved in the family owned agriculture implement dealership and has two associate degrees, one in Agriculture Diesel Technology and the other in Truck Diesel Technology. BrenDee grew up on her family’s farm and is currently a CPA with a master’s degree in Business Administration. Together the couple have a first-generation farm operation raising alfalfa, grass hay, and other various rotating crops.

As active Antelope County Farm Bureau members, the couple have developed events in their region to attract new Farm Bureau members. They also promote agriculture in their community by holding an “Ag Olympics” at the Antelope County Fair, distributing place mats with information about agriculture to local restaurants and participating in the Ag in the Classroom program, which offered teachers agriculturally based resources to use in their classrooms.

In the next five years, Randy hopes the family’s implement dealership will grow its employee base and work on an H-2A temporary agricultural program to allow them to continue to keep up with the demand for sales and service. BrenDee wants to expand the number of agricultural clients at her CPA firm and is working towards becoming a partner in the firm.

The Reinkes will continue to grow their leadership with Farm Bureau and want to continue their active role in policy development, advocating for agriculture, and supporting agricultural education.

“Farm Bureau is instrumental to supporting agriculture and we want to be involved in promoting Farm Bureau to as many people as we can to show the support the organization provides for agriculture,” BrenDee said.

Farm Bureau members between the ages of 18 and 35 can apply for the Young Farmers and Ranchers Excellence in Agriculture award. As Nebraska winners, the Reinke’s will receive $500 and an all-expenses paid trip to the 2020 American Farm Bureau Annual Convention in Austin, Texas in January to compete with other state winners at the national level.