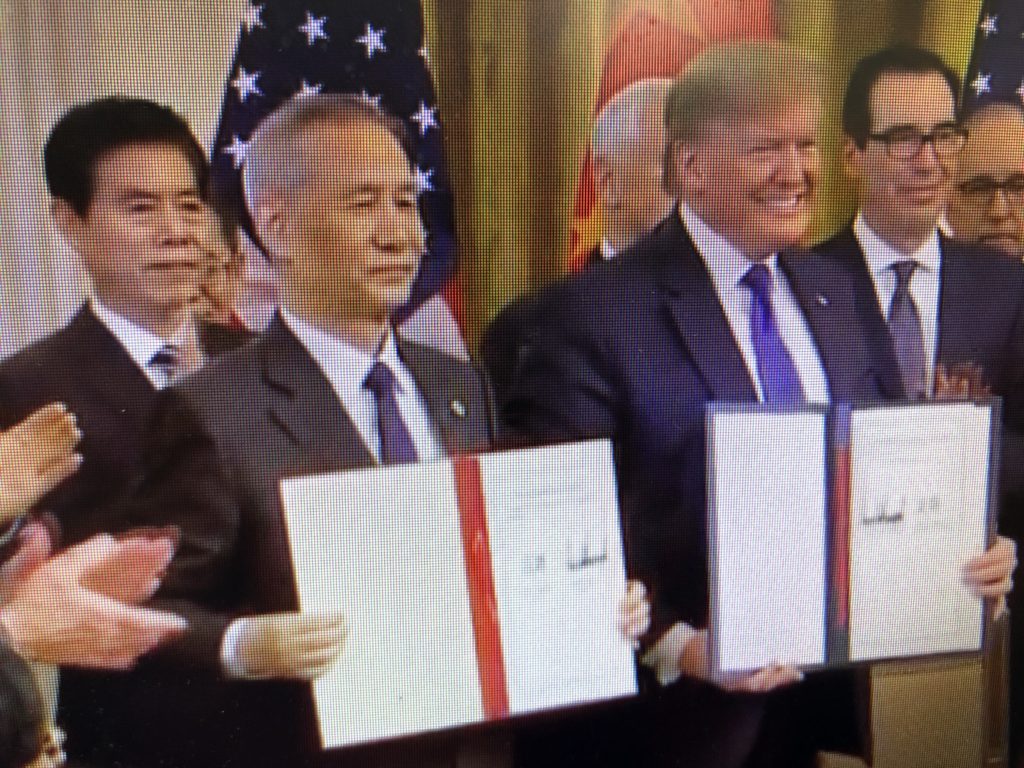 U.S. Secretary Perdue issued the following statement after President Donald J. Trump signed the historic Phase One Trade Agreement between the United States and China:
“This agreement is proof President Trump’s negotiating strategy is working. While it took China a long time to realize President Trump was serious, this China Phase I Deal is a huge success for the entire economy. This agreement finally levels the playing field for U.S. agriculture and will be a bonanza for America’s farmers, ranchers, and producers,” said Secretary Perdue. “China has not played by the rules for too long, and I thank President Trump for standing up to their unfair trading practices and for putting America first. We look forward to exporting to Chinese customers hungry for American products.”

The soybean industry applauds the Administration for making considerable strides with China in its Phase 1 deal and is hopeful the agreement will lead to additional measures that restore open trade between the two countries, including a negotiated solution in the next phase that removes tariffs on American soybeans shipped to China.

“We have long supported changes to how China conducts business with the world, in agriculture and other industries. Today’s signing addresses many of those concerns and is a positive for the U.S., including reduction of non-tariff barriers to trade that are important to soybean growers and other agriculture groups.” said Bill Gordon, soy farmer from Worthington, Minn., and ASA president.

Changes outlined in the Phase 1 deal are encouraging: Increased agriculture purchases; a more predictable, efficient, science- and risk-based regulatory process for evaluation and authorization of agricultural biotechnology products; improvements to sanitary and phytosanitary measures; and intellectual property protection for agriculture, among others. The American Soybean Association (ASA) has actively advocated for many of the improvements itemized in White House summary documents of the deal.

“We are very pleased to see true progress on the regulatory process for ag biotech products, sanitary and phytosanitary measures, and other big points of concern. And, importantly, this milestone moment in the negotiation process bodes well for de-escalation of the tension between our two countries and making further progress,” Gordon commented, “Yet, as an industry, we have a lingering unease regarding the tariff on U.S. beans, which was not addressed in this deal. China needs to take action, and, as a goodwill gesture, offer to remove its retaliatory tax on our soybeans.”

According to documents released by the White House outlining details of the deal, China’s imports of U.S. agricultural products, “such as soybeans, cotton, grains, meats, ethanol, seafood, and the full range of other agricultural products,” will total at least $80 billion over the next two years.

“Today’s signing of the Phase One deal with China is positive for American agriculture and Nebraska’s farm and ranch families. There’s no question it’s a critical step forward in stopping escalation of the trade dispute with what has been one of our largest trading partners and purchasers of Nebraska agricultural commodities; particularly Nebraska soybeans. Equally important, this deal opens the door for the U.S. to regain a foothold in Chinese markets. Make no mistake, there’s a lot of ground for the U.S. to make up. Our diminished access created cracks allowing many of our global competitors to make inroads into China. While we’re still learning about the full provisions, there appears to be much promise in this deal for agriculture. We are extremely hopeful the excitement around the agreement is validated by the Chinese in the form of significantly increased purchases of U.S. and Nebraska agricultural commodities and products moving forward.”

“Trade is always good news. Every Nebraskan is rooting for the President to get good deals done. More trade is a win-win for Nebraska’s farmers and ranchers. The Chinese aren’t our foes, but the tyrants running the Chinese Communist Party are. Nebraskans want to keep the pressure on the commies in Beijing and make sure Chinese families can enjoy the best ag products in the world.”