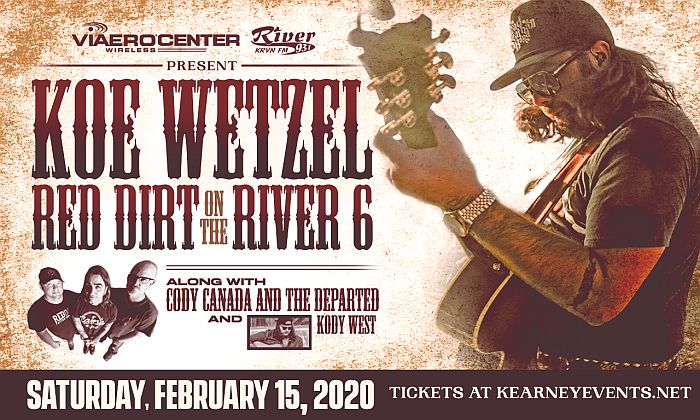 The 2020 Red Dirt on The River concert will feature Koe Wetzel along with Cody Canada and the Departed and special guest Kody West on February 15th at the Viaero Center in Kearney.

Red Dirt on The River returns on Saturday February 15, 2020 to the Viaero Center in Kearney! Presented by 93.1 The River(KRVN-FM) and the Viaero Center, the concert will feature Koe Wetzel along with Cody Canada and the Departed and special guest Kody West.

KRVN Radio Operations Manager Adam Smith describes Wetzel as “one of the hottest entertainers in the Texas Music scene right now. We’re excited to bring River listeners three artists that have not played Red Dirt on The River before!” Smith adds that Koe’s latest radio single, Ragweed, “is a tribute to a band that influenced his style of music. Cody Canada founded that band and it’s going to be a special opportunity to see Koe share the same stage as one of his idols.”

Tickets are general admission at $28 plus fees.  They  go on sale Friday November 15th at 10:00am on KearneyEvents.net. There will be a special River listener ticket pre-sale on Thursday November 14th starting at 10am. Use the “Koe-word”: RAGWEED

Music critic Buddy Logan says “Harold Saul High” is Koe Wetzel being 100% Koe Wetzel but adding a new level of songwriting that proves Koe belongs at the forefront of this scene. It’s 90’s and early 2000’s punk rock meets raw, hillbilly east Texas country music. This album marries the authenticity of Koe’s live performance with an even better look into the mind and soul of the writer behind the pen, all at the same time appreciating the wit and heart of Koe in his nature as a fun-loving dude who loves to have a good time. Everyone who complained about having to wait for a new album from Koe gets more than they deserved and likely expected. “Harold Saul High” is sure to be one of the few albums that defines this generation of Texas music.” –

Cody Canada & The Departed is a three-piece Americana roots-rock band based in New Braunfels, Texas. The band is comprised of frontman Cody Canada, bassist Jeremy Plato, and drummer Eric Hansen. The Departed has released three albums since their formation: This Is Indian Land (2011), Adventus (2012) and HippieLovePunk (2015). Canada released two additional double-disc live acoustic records, “Some Old, Some New, Maybe A Cover Or Two,” (2013) and, “Chip and Ray, Together Again for the First Time,” (2015), both recorded at Third Coast Music in Port Aransas Texas. ‘Chip and Ray’ was recorded with long time friend and producer, Mike McClure (The Great Divide).

Kody West started playing music in 2014, eager to take on as many acoustic gigs and songwriting competitions in the Ft. Worth/Dallas area that he could. He took on the role of tour manager in the beginning of 2015. On the road with the band, he rapidly gained valuable hands-on experience working and playing music across the state of Texas. Thanks to this time on the road, and his endearing songwriting he was quick to gain a large following of loyal fans. In the past 3 years he and his band have traveled across the country playing their good for the soul tunes, and are now working on a new record to be released in the new year. The wheels on the van never stop turning and these boys never stop working. Try to keep up!