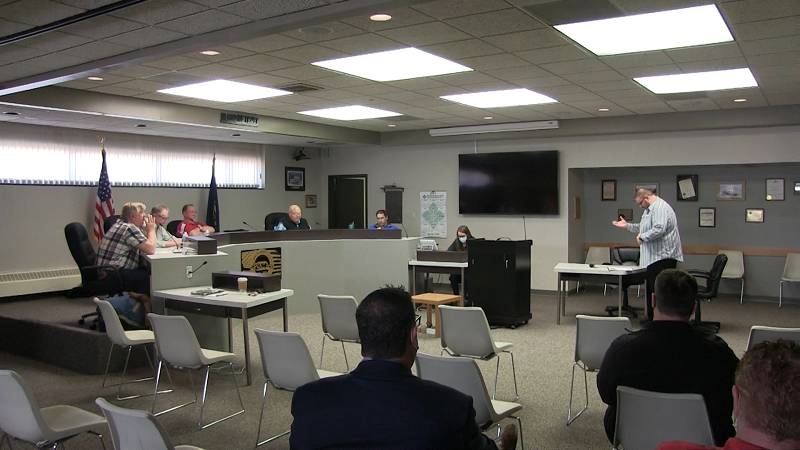 Scotts Bluff County governmental units are starting to plan for the costs of upgrading first responder radio equipment in the near future, at an overall estimated cost of nearly $7.2 million dollars.

On Friday last week, County Communications Coordinator Tyler Rexus presented a preliminary plan to the County Board, saying the county’s share would be more than $4.2 million for base units and associated software in the Communications Center, plus the county’s vehicle and hand-held radios.

In an exchange with Commissioner Russ Reisig, Rexus said use of 911 surcharge funds from the state is restricted. “That money cannot be used on anything radio-related,” said Rexus.

“So, this is all going to come out of the County budget as an expense?” asked Reisig, to which Rexus explained, “Not all of it. The subscribers (other cities and agencies) will pay for their part. We could also, and I need to talk with Lisa (Rien, County Management Accountant) about this, we can explore some other options and talk with them about sharing costs of the infrastructure (at the Comm Center) too.”

Sheriff Mark Overman explained to Commissioners that the shift to cell phones will complicate funding, as a one-dollar 911 surcharge on landlines doesn’t provide money for such projects like it used to.

“Those landlines have decreased by more than 80 percent, we just don’t have them anymore. So, 85 percent of that money is gone, it’s just gone, and that’s nationwide,” said Overman. “Now, there is the surcharge that goes on cellular phones, but that doesn’t come here, it goes to the state. And the state says, ‘Well, we’ll give it to you…maybe’.”

Rick Derr with Action Communications explained that as currently proposed, the costs to each agency would be spread out over seven years. The project is needed because the Motorola radios currently used are at least 30 years old, and the company is no longer providing support or parts for the models currently used throughout the county.