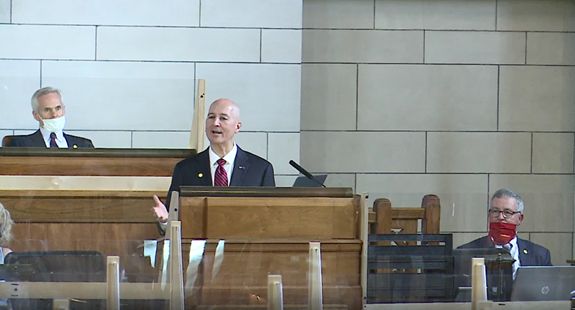 Ricketts addressed the Legislature July 24, two days after lawmakers stopped short of advancing a property tax relief bill, making its fate unclear. Ricketts recommended that senators package property tax relief and a business tax incentive bill together to get the votes necessary to pass. He emphasized their importance, especially the business tax incentive bill, since it would replace the Advantage Act, which expires in December.

Ricketts highlighted the following bills as his priorities:

Lawmakers anticipated COVID-19 would greatly affect Nebraska’s revenue for this fiscal year, but the state’s forecasting board is estimating the impact won’t be as severe as expected.  On July 23, the Nebraska Economic Forecasting Advisory Board met to update its pre-COVID revenue projections.

The revised forecast projected nearly $90 million will be available for high-cost legislative bills like property tax relief and business tax incentives. The last forecast, in February prior to COVID-19, said that there would be $138 million leftover for these bills.

Ricketts previously said that the new forecast reflected the strength of the economy despite the pandemic.

“We must step up to the challenge in the remaining days of the session,” Ricketts said when he spoke to legislators.

In a later press conference, Ricketts continued to implore people to wear masks, but said he does not support a statewide mandate. He said his administration is reviewing Lincoln and Douglas County’s authority to mandate face coverings.

“A mask is a tool to be able to help you slow the spread of the virus,” Ricketts said. “You use it when you’re gonna be inside closer than 6 feet to someone else.”

He encouraged Nebraskans to continue social distancing, wear a mask when going to stores, wash hands often and avoid crowded bars or restaurants.

Ricketts explained his six-pillar plan to continue to fight COVID-19. The first is testing. Ricketts said Nebraska has more testing per capita than surrounding states. The other pillars include: contact tracing, lodging for first responders, quarantine space for the public, personal protective equipment and working closely with at-risk communities.

During his address to the Legislature, Ricketts said Nebraska continues to persevere through COVID-19, but work still needs to be done.

Ricketts recognized that thousands of Nebraskans have been personally impacted by the pandemic. He thanked Sen. Mike Moser of Columbus for sharing his story about contracting COVID-19 and his willingness to return to the Legislature. Ricketts also sent his condolences to Sen. Tony Vargas of Omaha, whose father passed away from COVID-19 in New York.

“This has been perhaps the greatest challenge our state has faced in a generation but with typical Nebraska grit and determination our people have risen to the challenge,” Ricketts said.

He admired Nebraskan’s work ethic including things such as sewing face masks, staying home when directed and supporting food pantries. He also applauded the Legislature for passing legislation to provide emergency funding in response to the pandemic and all the public health officials working around the clock to slow the spread of the virus.

“This pandemic is not over, and we still need Nebraskans to continue to exercise their personal responsibilities and civic duty to fight it,” Ricketts said.