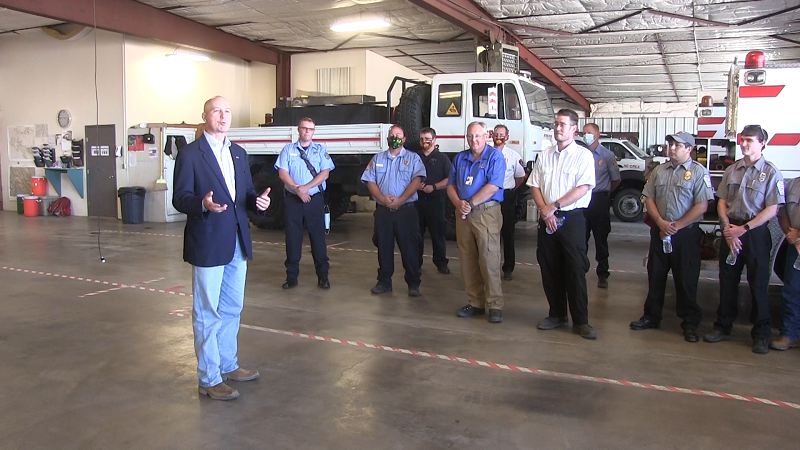 Following a tour of the fire-scarred hills and range lands of the Hubbard Gap Fire in Banner County, Governor Pete Ricketts met with firefighters and first responders who battled the flames Wednesday afternoon, lavishing them with praise.

“You all represent that true spirit of grit, determination, resilience, the hard work, that community service that really is what Nebraska is about,” said Ricketts, “We were talking last year about the floods and ‘Nebraska Strong’, you all were demonstrating that again in fighting this fire, to be able to make sure you protected folks, kept damage to a minimum amount and preserved people’s homes.”

Speaking at the Gering Fire Hall, Ricketts highlighted the work done by the 25 departments that responded, with upwards of 100 engines from agencies across much of the Panhandle, Western Nebraska and Wyoming. The importance of the air assets from Chadron, South Dakota and Colorado were highlighted, with the Governor mentioning it was likely no one there could remember the last time a plane scooped water from Lake Minatare to fight a fire. Some 36,000 gallons of water were dropped on the blaze over the course of five days.

Ricketts also conveyed the thanks of Nebraska Emergency Management Agency Director Bryan Tuma, who told the Governor the firefighting operation worked like a well-oiled machine, even if at times on the ground it may not have seemed that way.

Ricketts said commended the quick response of firefighters on Sunday, when a wind-driven flare-up jumped fire lines and threatened homes. He said Gering Fire Chief Nathan Flowers, the Assistant Incident Commander, told him the flames could have run another four miles to the east and consumed up to a total of 10,000 acres, but instead the overall damage was limited to 4,000 acres. 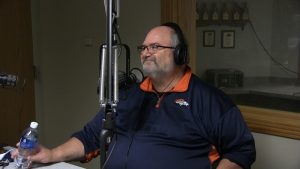