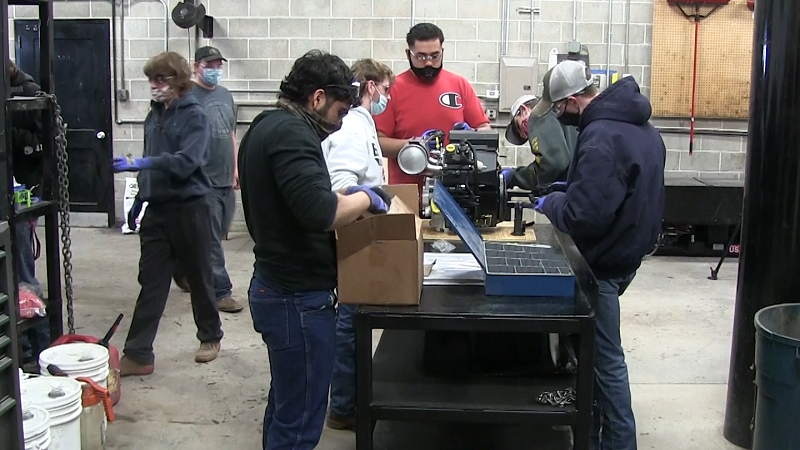 12 Scottsbluff High students are trailblazers this winter, taking part in the new pilot education program in conjunction with Aulick’s in Scottsbluff.

The Diesel Technology program is the latest addition to the school’s career academies, and on Wednesday the students displayed their skills, building components that would be installed on Aulick truck products.

Company Service Manager James Miller said the instruction follows a natural progression. “They start with the wet kits, just general assembly of how to put things together, just starting small,” said Miller, “then  the next step they’ll be with Mr. Zeiler and Mr. Schmaltz, and then they’ll be pulling a motor out of a truck, tearing it apart, digging into it and getting greasy.”

Senior Zakk Laeger saying the class will lay a good foundation for their futures. “A lot of the stuff we’re learning is all stuff we’re going to use later in life. I know us three (with juniors Tristan Encinia and Jose Varela-Sanchez), we all plan on being mechanics in our lives, so the stuff we’re learning now just helps us out for later,” said Laeger. “It also gives us the opportunity to come to this company if we wanted to and if they wanted us to come to them after we’re done with this program.”

Miller says technicians are in high demand in the region and the career pays well, noting one of the company’s younger staffers at the age of 21 has already purchased a home and a new truck.

School officials say depending on the progression of the pilot program, it could be expanded in coming years.