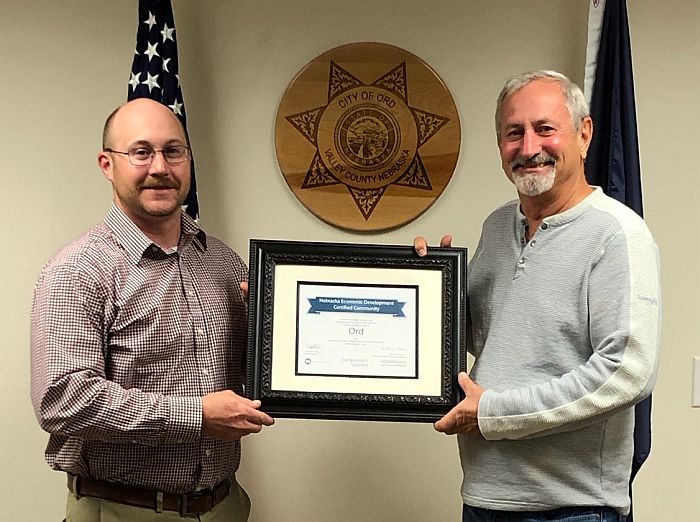 Ord is one of 40 Nebraska communities to earn EDCC status in the program, which is sponsored by the Nebraska Diplomats and administered by DED. State officials established the EDCC program in 2005 to recognize communities for their preparedness to attract new industries and grow existing businesses. Ord received original EDCC certification in 2005, and earned recertification in 2009, 2014 and 2019.

Qualifying EDCC communities must have a well-defined program that offers a supportive environment for new development and actively engages with the existing business community. This includes documenting available sites and buildings, local financing and incentive programs, and a strategic plan for economic development.

Over the past decade, the City of Ord and its partners have secured nearly $4.4 million in public and private sector grant funding. In addition, the community’s economic development program has funded more than $5.6 million in low-interest loans to 64 area businesses. Funds were distributed in Valley County, and leveraged $12 million in private investment.

The City’s recent partnership with Valley County Economic Development (VCED) resulted in the construction of a $5 million, 40-room hotel and convention center in 2016. Over the past several years, the community has hosted a number of statewide meetings at the hotel’s 500-person convention center. As a result, the facility increased the City’s lodging tax collections by 302 percent.

In 2018, VCED worked closely with local and regional partners to assist a local manufacturer’s expansion in the recently-closed Shopko store. The move created 20 additional jobs within the community.

Over the past several years, local leaders have focused on new housing and recreational developments. The City of Ord recently partnered with DED to construct a 37-unit housing development in southwest Ord, which resulted in the completion of 14 homes and six duplexes. In addition, the City completed a $3.5 million pool project with assistance from a VCED-led fundraising campaign. The Alfred and Irma Burson Aquatic Center opened in 2019 and replaced Ord’s former, 41-year-old pool.

“The City of Ord appreciates local investments that have led to new development and enhanced quality of life,” said VCED Executive Director Trevor Lee. “Our community’s business and housing sectors have grown significantly since our original EDCC certification in 2005, and this program continues to assist Ord in our efforts to create new economic opportunities.”

For additional information on the Economic Development Certified Community Program, Contact Ashley Rice-Gerlach at 308-655-0919 or ashley.gerlach@nebraska.gov; or visit https://opportunity.nebraska.gov/program/economic-development-certified-community-edcc/.