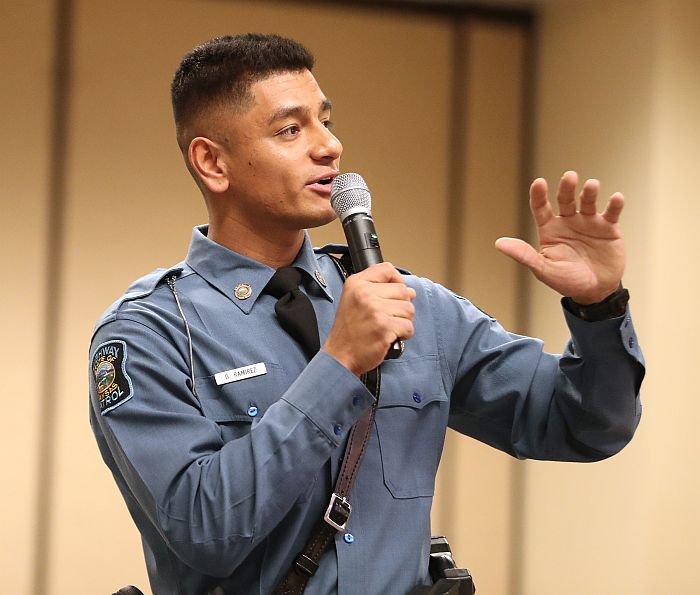 KEARNEY – About 200 middle school students, most from minority backgrounds, filled the chairs inside the University of Nebraska at Kearney’s Nebraskan Student Union as Gustavo Ramirez took the stage.

Dressed in his blue Kansas Highway Patrol uniform, the 29-year-old state trooper was about to share a story you don’t often hear from a law enforcement officer.

“My problems began at the age these kids are at right now – in middle school. That’s when my mentality changed. That’s when I was easily influenced,” said Ramirez, the keynote speaker at Friday’s seventh annual Youth Empowerment Conference hosted by UNK’s Office of Student Diversity and Inclusion and Sigma Lambda Beta fraternity.

Ramirez has been with the Kansas Highway Patrol for two years, but he was once heading down a much different path.

As a teenager, Ramirez and his friends liked to party and drink alcohol. They weren’t concerned about life after high school.

“I was out of control,” said Ramirez, who was born in Mexico before his family immigrated to Lexington when he was a young boy.

He’s also lucky to be alive.

In November 2006, Ramirez and four other Lexington teens were in an early morning crash near their high school. The car they were in struck another vehicle then collided with a pole before rolling into a grassy area where it burst into flames.

One of the teens was pronounced dead at the scene, another died at the hospital the next day. Ramirez, who was 16 at the time, suffered only minor injuries.

Instead of using the accident as a wake-up call, Ramirez continued to drink and party. He was arrested multiple times during high school.

“I was not only hurting myself, I was hurting my parents,” he said. “My mom would stay up countless nights crying while she waited for me to get home.”

Ramirez was a standout athlete with decent grades, but college would never be an option the way he was living. He didn’t start thinking seriously about his future until he was 17, and his girlfriend became pregnant.

Ramirez was in bed, lying next to his pregnant girlfriend, when he received the phone call that turned his life around. Juan Guzman, director of the Office of Student Diversity and Inclusion, was calling to let him know UNK was offering him a scholarship and an opportunity to attend college.

“That was a big turning point in my life,” Ramirez said. “When I got to college, it’s like a switch turned on.”

Ramirez was “all business” at UNK, where he studied criminal justice with a minor in political science and found a group of friends, faculty and staff members who supported and believed in him. He graduated with honors in summer 2012.

“That was one of the best feelings of accomplishment,” Ramirez said. “Who would have imagined? Definitely not me if you would have asked me in high school.”

However, his past wasn’t completely in the rearview mirror.

“The choices you make really do follow you throughout your entire life,” said Ramirez, who was rejected by multiple law enforcement agencies during his job search despite having references from the people who once arrested and prosecuted him.

After working for the Nebraska Department of Health and Human Services and Lexington YMCA, Ramirez eventually got his shot with the Kansas Highway Patrol, where he’s been a trooper since December 2017.

“I’m very proud of what I do,” said Ramirez, who lives in metropolitan Kansas City with his girlfriend and three children.

“I want to be able to give back to the country that made me what I am today.”

The event gives middle schoolers an opportunity to learn more about higher education and the opportunities at UNK while addressing topics such as college readiness, healthy relationships, social media and personal branding, leadership, positive influences and gaining strength from adversity.

Guzman, who also serves as the adviser for UNK’s Sigma Lambda Beta fraternity, said it’s important to show underrepresented students they can pursue a college degree.

“We want to inspire them,” he said. “We want attendees to see there are others like them who have successful careers.”