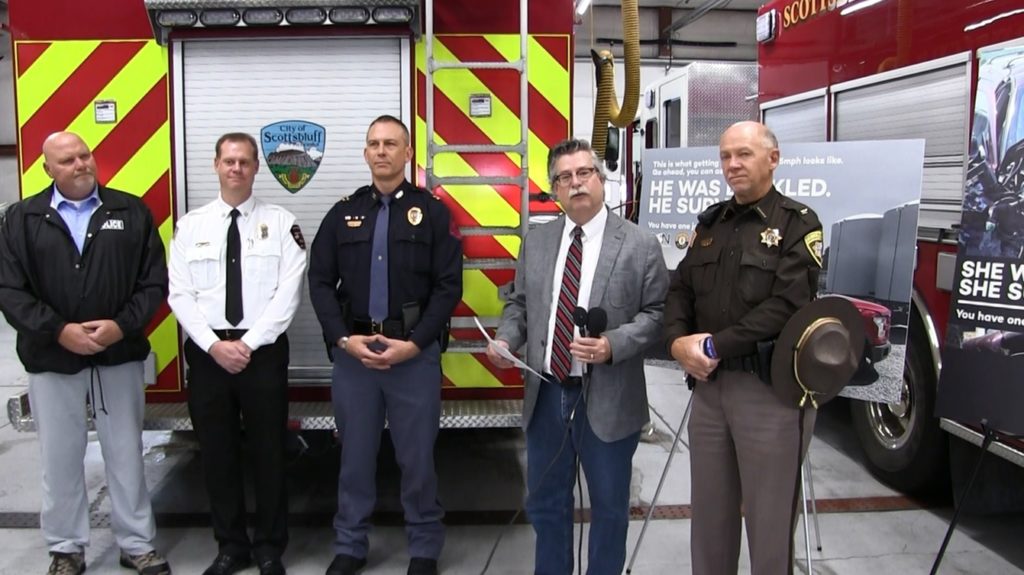 The statewide kickoff of the Annual Thanksgiving Click It or Ticket Mobilization took place at the Scottsbluff Fire Station Tuesday morning.

Each first responder cited experiences where the seat belt in a crash made the difference between living and dying.

To keep drivers and their passengers safe, the Nebraska Department of Transportation – Highway Safety Office is partnering with Nebraska Law Enforcement to share an important lifesaving reminder: Click It or Ticket.  This mobilization will run from November 27th through December 1st.

The Thanksgiving holiday is one of the busiest seasons for America’s roads. With millions of drivers traveling near and far for Thanksgiving dinner, it’s more important than ever to stress the importance of seat belt safety.

During the 2017 Thanksgiving weekend 365 people were killed in crashes nationwide. In Nebraska, last year 66% of our fatalities were unbuckled. People who live in rural areas might believe that their crash exposure is lower, but last year 73% of Nebraska’s traffic fatalities occurred in rural areas.

The majority of these deaths could have been completely prevented with the simple click of a seat belt. If you’re ejected from a vehicle in a crash, odds are that you will not survive. In 2017, 8 out of 10 (83%) of the people totally ejected from vehicles in crashes were killed. #BuckleUpNE