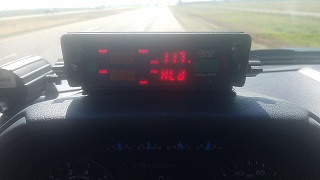 Operation Safe Driver Week is an annual campaign, coordinated by the Commercial Vehicle Safety Alliance (CVSA). Law enforcement agencies throughout North America participate in the annual operation to raise awareness and focus enforcement efforts on issues related to commercial motor vehicles and traffic around those vehicles. This year, the CVSA identified excessive speeding as an issue of concern throughout the United States.

During the campaign, which ran from Sunday, July 12, through Saturday, July 18, troopers participated in a Trooper in a Truck event and performed high-visibility patrols throughout the state. Last week, troopers issued 34 speeding citations for drivers clocked at 100 miles per hour or more.

In total, troopers issued 624 citations for speeding. Troopers also arrested 21 people for driving under the influence of alcohol and performed 295 motorist assists throughout the week.

“The dramatic reduction in traffic due to COVID-19 response has led to fewer fatalities than recent years on Nebraska roads,” said Colonel John Bolduc, Superintendent of the Nebraska State Patrol. “But as traffic volume increases, motorists needs to practice safe driving to keep the trend moving in the right direction and keep Nebraska roads safe.”

The Nebraska State Patrol also partnered with the state law enforcement agencies of Iowa, Kansas, Missouri, and Arkansas this weekend to raise awareness of the dangers of excessive speeding. In the four months since Nebraska’s first directed health measures were issued, troopers have cited 425 drivers for speeding at or above 100 miles per hour. That figure is 200 above the average of 225 similar citations issued during the same time frame from 2015-2019.