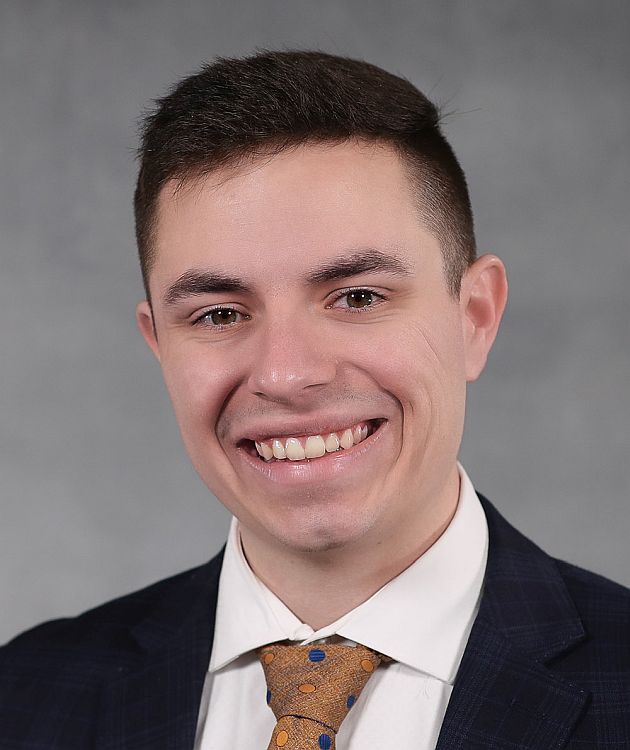 KEARNEY – When Austin Jacobsen first attended the Intercollegiate Broadcasting System (IBS) College Media Awards in 2018, he was thrilled to even be nominated.

“Now, the students in our program have an expectation to go to New York City every year and to win awards,” said Jacobsen, sports director at the University of Nebraska at Kearney campus radio station, KLPR 91.1 FM.

The sports communication and exercise science major from Sidney took first place in the best sports interview category at this year’s competition, which includes campus radio and television stations from across the country. Jacobsen earned the award for his interviews with UNK head football coach Josh Lynn on the “UNK Coaches Show.”

He was also part of the “UNK Gameday” production team who won best sports pregame/postgame show at last year’s College Media Awards. “UNK Gameday” was a repeat finalist in the category this year.

“We all strive to be the best,” said Jacobsen, who worked with fellow UNK students Cade Cox of North Platte and Lucas Bolubasz of Lincoln on the KLPR football pregame show. “I’m glad we had this great opportunity to interview and get to know coach Lynn every week of football season. It shows how great our UNK community is.”

A six-time College Media Awards nominee, Jacobsen is one of four finalists for best sports director at a college radio station. That award winner has yet to be announced by IBS.

Ford Clark, general manager of KLPR and a senior lecturer in UNK’s Department of Communication, called Jacobsen an “incredible leader” who helped take the radio station to a new level by adding more content and athletics coverage.

“His dedication and work ethic are second to none, as evidenced by his academic standing along with his KLPR duties and professional work for the Rural Radio Network,” Clark said.

Jacobsen, a UNK senior who works part time for Lexington radio station KRVN, gave credit to Clark and other communication faculty, as well as his KLPR colleagues, for helping develop his broadcasting skills.

“I’ve been incredibly blessed to work with so many great people,” Jacobsen said. “This program has come a long way since I first started calling games back in fall 2017, and without the help of Ford Clark, it wouldn’t be where it is today.”

Another KLPR program, “Loper Update,” was a finalist in the best sports update category. That program features UNK students Canon Rath of Kearney and Madison Reiber of Alliance.

“Expanding the programming to include ‘Loper Update’ has been awesome for keeping our listeners up to date on UNK sports,” Clark said. “Canon and Madison have worked very hard to fine-tune this program and it’s incredibly rewarding to see their efforts recognized.”

In the best public service announcement category, UNK students Britney Manuel of Omaha, Alana Kellen of Madison, Taylor Wilson of Kearney, Cydney Christner of Cozad and Tiara Schmidt of McCook were finalists for their “caffeine” announcement.

“Writing and producing messages for broadcast use isn’t an easy thing to do, especially when you’re not doing this on a day-to-day basis,” Clark said. “But this group did it with award-winning results.”

More than 3,000 entries from a diverse group of schools, including Division I universities, were submitted for the College Media Awards. Finalists represent the top 3% of these students.