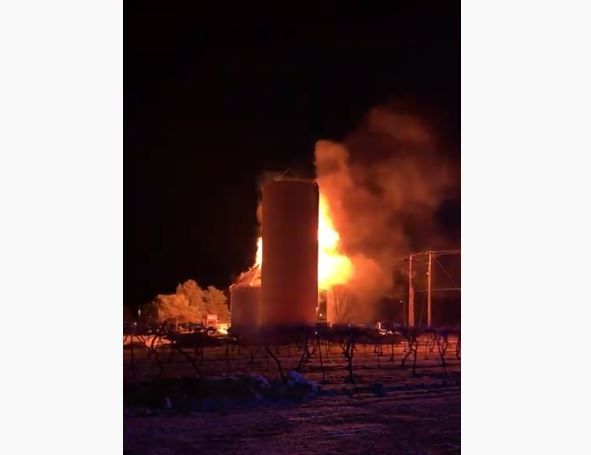 Lexington Volunteer Fire Department responded to an outbuilding fire Saturday night at Mac’s Creek Winery and Brewery. Fire Chief Dahlas Holbein says the call came in around 11:15pm. An old granary building was on fire. He said flames were shooting 20 to 30 feet above the building upon their arrival on the scene. He said the high winds contributed to the building being consumed so quickly.

Mac’s Creek co-owner Max McFarland said the building served as a granary when the property was a feedlot but, they adapted it for their own use. He said “we used it to actually store all of our vineyard equipment from tractors, mowers and sprayers, vineyard supplies, irrigation supplies, etc. Everything having to do with the vineyard side of the operation was pretty much stored in that building”.

Holbein believes it was caused by an electrical short from the power line leading into the building.

McFarland said they were grateful the fire did not spread to nearby homes or their main building that houses their tasting room and processing. McFarland said the winery is “open for business, well and good, ready to serve you. So make sure that word gets out.”

The grape vines are in their dormancy this time of year but, branch trimming will occur within a couple months. That will give them time to replace equipment before it’s needed.