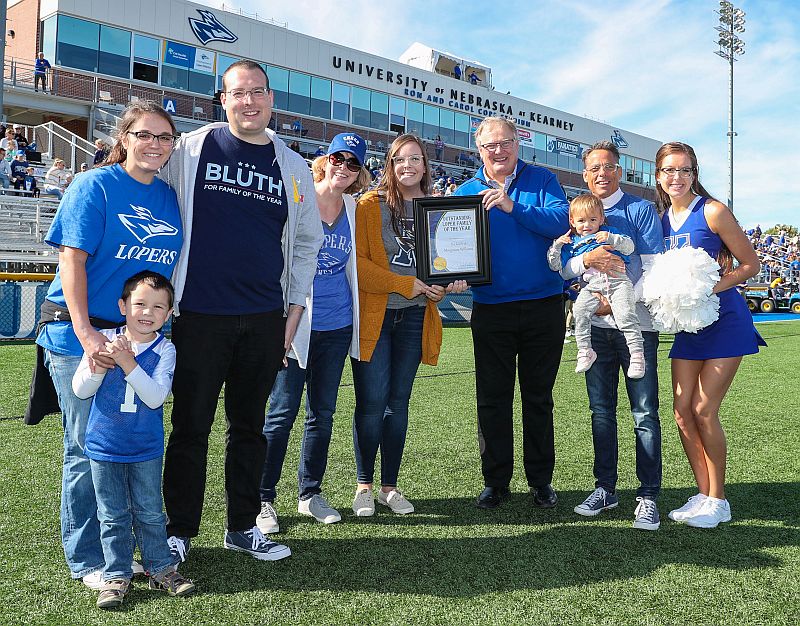 KEARNEY – When Krista Williams is on the sidelines cheering at a University of Nebraska at Kearney athletic event, there’s a good chance her parents Bill and Becky are in the stands watching.

The Kearney couple doesn’t miss many opportunities to support the Lopers or their five children, two of whom currently attend UNK.

“They’re die-hard UNK supporters, even though they didn’t go to school here,” said youngest daughter Morganne, a junior at UNK.

Becky, who works in the Kearney High School learning commons, attends freshman convocation each August to welcome the newest Lopers to campus and she was in the crowd during Thursday evening’s lip-sync contest, one of UNK’s homecoming traditions.

Bill, who co-founded Compass, a local nonprofit that provides foster care and family support services throughout central and western Nebraska, is a regular at UNK career fairs, and he’s spoken in various social work and family studies classes and served on advisory councils. He eats on campus once a week and isn’t afraid to drop by the Alpha Omicron Pi house to visit Morganne or help the sorority finish a last-minute project at 11 p.m.

“He’s probably on campus more than he’s at his actual job,” Morganne joked.

The Williamses just love to be involved, whether they’re attending a sorority event, listening to a musical performance or showing their Loper pride during an athletic competition.

“It’s really cool to have a university you can engage with,” Bill said. “I think the community of Kearney is spoiled to have UNK here, because it’s a great academic institution and there’s something for everyone.”

Fittingly, the family’s commitment to UNK was recognized during last week’s homecoming festivities, when they received the Outstanding Family Award. The Williamses were honored at Saturday’s homecoming parade before attending the home football game as special guests of UNK Chancellor Doug Kristensen.

Bill and Becky may not have attended UNK – they met as students at the University of South Dakota – but the family has plenty of connections to the school.

Their oldest son Trevor and his wife Carly both graduated from UNK, where he studied supply chain management and was a member of the Phi Delta Theta fraternity. The couple and their two children currently reside in Aurora and Trevor works for Grand Island Express.

Another son, Chase, attended UNK before transferring to the University of Nebraska-Lincoln, where youngest son Derrick earned his degree.

Krista, a senior general studies major and co-captain of the UNK cheer team, started her collegiate career at Concordia University in Seward before transferring to UNK after a year.

“The cheer program is very well-respected,” she said of her decision to return to Kearney. “UNK cheer is one of the premier teams in Nebraska.”

Krista, who is also a member of UNK’s Student-Athlete Advisory Committee and a dean’s list student, plans to pursue a career as a cheer and dance coach after graduating in May.

Morganne, a dean’s list student majoring in sociology with an English minor, is active with her sorority and she volunteers each summer at the Royal Family KIDS Camp for abused or neglected foster children. She’s currently interning as a family specialist at Compass, the nonprofit that started 12 years ago in her parents’ basement.

Compass, which recruits and trains families to host foster children and provides support services to reunite biological families, has worked with about 800 children, including more than 100 who were adopted through foster care.

The Williamses have welcomed nearly 50 foster children into their home over the years.

Inspired by her family, Morganne plans to continue working for Compass after graduation, and she wants to be a foster parent someday.

“I really admire how much my parents have been willing to support not only their owns kids in every way possible, but so many other children throughout my lifetime,” she said. “The passion my parents have to help kids who come from difficult places has impacted me so much.”