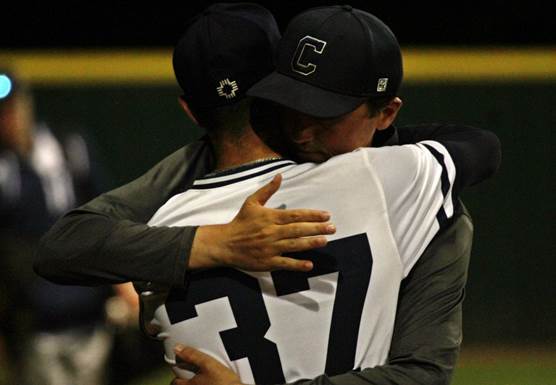 HENDERSON, Tenn. – Perhaps the greatest season in Concordia University baseball history came to an end late on Tuesday (May 14) evening in cool Tennessee air. There were hugs and teary eyes for a group that hoped to extend its stay in the Henderson Bracket at least one more day. Unfortunately, the Bulldogs failed to capitalize on plenty of run scoring chances and fell, 2-1, at the hands of 14th-ranked Texas Wesleyan University in an elimination game in the NAIA Baseball National Championship Opening Round.

This was the end of the line for 10 seniors, who helped head coach Ryan Dupic’s program to GPAC regular season titles and NAIA national tournament berths in both 2017 and 2019. The ’19 squad finished with an overall record of 33-20.

“It’s been a fun year. I can’t say I was prepared for this (to end),” Dupic said. “You start to think about the people and the environment that was created for everybody, which allowed the players to be themselves and us coaches to be ourselves. Sometimes in coaching I feel like you get stuck being the police all the time and you can’t let your hair down and just have fun. This team just did such an awesome job of balancing expectations and enjoying their experiences. It’s created an environment where we could all have fun.

“Obviously we’re sad we don’t have the opportunity to continue that. That’s always the challenge right away.”

With the season on the line, the pitching combo of Tanner Wauhob and Ryan Samuelson delivered by allowing just five hits to a potent Rams (46-15) offense that came into the day averaging nearly seven runs per game. In his final collegiate appearance, Wauhob covered 5.1 innings and surrendered two runs on five hits and three walks. When he ran into trouble in the sixth, Samuelson came to the rescue, quickly put the fire out and fired 3.2 innings of hitless, dominant relief.

While Tanner Amaral’s two-run single off of Wauhob provided Texas Wesleyan’s only tallies, Concordia waited until the bottom of the seventh to finally crack the scoreboard. That’s when Wade Council led off the frame with the 150th hit of his college career. He eventually came around to score on Teyt Johnson’s base hit to left. Council just did bit the tag on a close play at the plate.

Johnson’s hit finally ended a run of frustration with runners in scoring position. The Bulldogs had been 0-for-9 with runners in scoring position against Ram hurler Glad Houston prior to that at bat. Following Johnson’s RBI single, Houston buckled down and retired the final seven hitters to polish off a complete game. Houston scattered 10 hits and struck out nine Bulldogs while throwing 136 pitches.

The senior class featured the likes of seniors in second baseman Christian Meza and shortstop Logan Ryan, as well as closer Dylan DuRee. Meza concluded his career with program all-time rankings of first in doubles, second in hits (216), second in RBIs (141), third in games played (189), sixth in runs scored (115) and seventh in batting average (.340). Ryan has now played in more games (194) than any player in school history.

For those who are coming back, the game has changed. An unprecedented staff of pitchers will remain mostly intact, headed by current junior Jason Munsch, who fired a gem in Monday’s win over Clarke. The staff that shattered the school strikeout record led the way for a 23-5 record in conference games.

“I got a text from Drew Olson and he talked about creating that type of program where you expect to go to nationals every year and that’s the hope as we move forward,” Dupic said. “With those juniors having been through this a lot I hope they can see just how close we are. Bottom line is we have to go back to work and keep getting better.”

Concordia has gone 1-2 in both of its opening round appearances. The 2017 squad earned a win over Jamestown in national tournament action in Hutchinson, Kan.