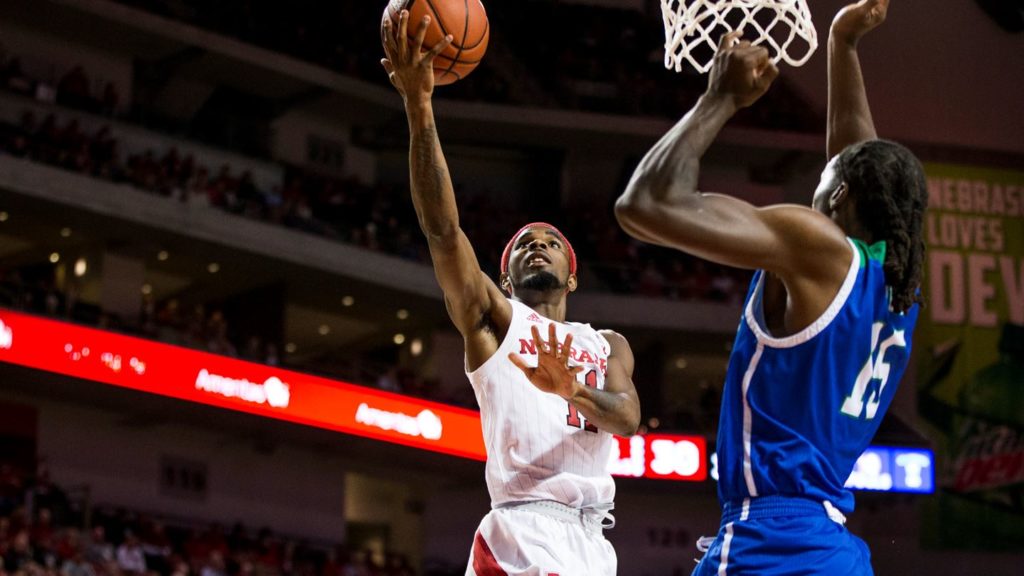 Tipoff is set for shortly after 8 p.m. and a limited number of 100 Level tickets are available for purchase by visiting Huskers.com/Tickets, calling the NU Athletic Ticket Office at 800-8-BIGRED or at the Pinnacle Bank Arena box office beginning 90 minutes prior to tipoff.

Nebraska (6-8, 1-2 Big Ten) looks to bounce back following a 79-62 loss to Rutgers on Friday night. The Huskers shot just 31.7 percent while Rutgers shot 54 percent and out-rebounded the Huskers 48-31. Senior guard Haanif Cheatham had 16 points, while sophomore guard Cam Mack added 11 points, six assists and five rebounds for the Huskers.
Cheatham has been steady in his first season as a Huskers, scoring a team-high 13.3 points per game while shooting a career-best 52.3 percent from the field. He has reached double figures in nine of the Huskers’ last 10 contests, including a pair of 20-point performances.

Garza has been one of the best big men in the country during the first half of the season, leading the Big Ten in scoring (22.5 ppg) and ranking second in rebounding (10.1 rpg). In conference play, Garza is averaging 33.0 points per game.

PLAYER SPOTLIGHT
Cam Mack leads the Big Ten with 9.3 assists per game in conference games. Mack is also sixth in Big Ten games with a 3.1-to-1 assist-to-turnover ratio.

NUMBERS TO KNOW
.462 – Thorir Thorbjarnarson is fourth in the Big Ten in 3-point percentage entering Tuesday’s game. He is 18-of-39 from long range this season after going a combined 6-of-28 behind the 3-point stripe in his first two years.

+3.1 – Nebraska enters the week tied for the Big Ten lead in turnover margin at +3.1 per game. NU has committed 12 or fewer turnovers in each of the last six contests, including a season-low seven turnovers against Rutgers.

3 – Double-figure assist games for Cam Mack, which is the most by a Husker since Brian Carr had five in the 1985-86 season.

50 – Returning point total from last season, all by Thorir Thorbjarnarson. That is the lowest by any power conference team since the 2009-10 season.

SCOUTING IOWA
Iowa, which was ranked 23rd in last week’s AP poll, is 10-4 on the year following an 89-86 loss to No. 21 Penn State in Philadelphia Saturday afternoon. The Hawkeyes were led by junior Luka Garza’s 34-point effort while Joe Wieskamp added 23 points, including 5-of-10 from 3-point range in the loss which featured 24 lead changes before Penn State pulled ahead late.

On the year, the Hawkeyes have been steady since an early-season loss to DePaul, as Iowa’s only losses since Nov. 11 have been against unbeaten San Diego State, at Michigan and at Penn State. Iowa has neutral-site wins over Texas Tech and Cincinnati as well as wins at Iowa State and Syracuse. Tuesday’s game ends a stretch where Iowa has played just one home game since Dec. 9.

Garza is one of the Big Ten’s premier players, leading the conference in scoring at 22.5 points per game while grabbing 10.1 rebounds per game to rank second in the Big Ten. Sophomore Joe Wieskamp (13.5 ppg) and redshirt freshman CJ Frederick (10.3 ppg) also average double figures and both shoot over 40 percent from 3-point range.

SERIES HISTORY
The Hawkeyes lead the all-time series, 20-12 in a series that dates back to 1907. It is NU’s third-oldest series against a Big Ten foe, as only NU’s series with Minnesota and Wisconsin have been around longer. The teams had not met since 1976 before NU joined the Big Ten in 2011-12. Nebraska is 5-8 against the Hawkeyes since joining the Big Ten and the home team has won the last six meetings dating back to 2016. NU is 10-5 in Lincoln against the Hawkeyes, including 3-1 in Pinnacle Bank Arena.

Last Meeting: Nebraska erased a 16-point second-half deficit and scored 16 points in the final 47 seconds of regulation to force overtime in an eventual 93-91 victory over Iowa in the regular-season finale. Nebraska trailed 74-65 with 50 seconds remaining, but James Palmer Jr. and Glynn Watson Jr. hit four 3-pointers over the next 38 seconds to pull within 80-79 with 23 seconds left. After Iowa connected on 1-of-2 free throws, Palmer tied the game with a driving layup with 12 seconds remaining. In overtime, Amir Harris’ layup with 10 seconds left gave NU the lead before Thorir Thorbjarnarson blocked Ryan Bohannon’s potential game-winning 3-pointer as time expired.

• Nebraska Head Coach Fred Hoiberg and Iowa Coach Fran McCaffery squared off five times when Hoiberg coached at Iowa State. ISU went 4-1 against Iowa in that stretch, including a pair of games decided by three points.

• Two of the past three contrests in Lincoln between the Huskers and Hawkeyes have gone into overtime, including last year’s 93-91 Husker victory.

• It is not surprising that Nebraska has relied on its 3-point shooting, as Hoiberg’s Iowa State teams led the Big 12 in 3-pointers in four of his five seasons at the school. The Huskers are on pace to average 8.4 3-pointers per game, a total which would rank second in school history and be the most since the 2001-02 campaign.

• Yvan Ouedraogo’s 14 rebounds vs. Texas A&M-Corpus Christi on Dec. 29 were the most by a Husker freshman since 2004 (15, Aleks Maric vs. UAB) and tied for the third-highest total in the last 20 years. Ouedraogo is the third Husker to have a double-double this season.

• Cam Mack’s triple-double against Purdue on Dec. 15 was the first by a Husker in school history and the only one by a Big Ten player this season. As of Jan. 6, only 15 players have had a triple-double this season.

• Nebraska has 12 double-figure scoring runs this season, including a pair of double-figure runs against Texas A&M-Corpus Christi.

• Nebraska’s 14 first-year players on the roster matches TCU for the most in the nation in research done by the Utah SID John Vu. Only four teams (TCU-14, Nebraska-14, East Carolina-13 and Utah-12) have at least 12 newcomers on their 2019-20 rosters. Nebraska returns a national-low 1.9 percent of its scoring from last season and the 50 returning points is the lowest by any power conference team since 2009 according to noted statistician Ken Pomeroy.

• Dachon Burke Jr. enters the Iowa game with 983 career points, including his two seasons at Robert Morris. He needs 17 points to become the third Husker to reach the 1,000-point mark this season, joining Matej Kavas (Nov. 22) and Haanif Cheatham (Dec. 29).