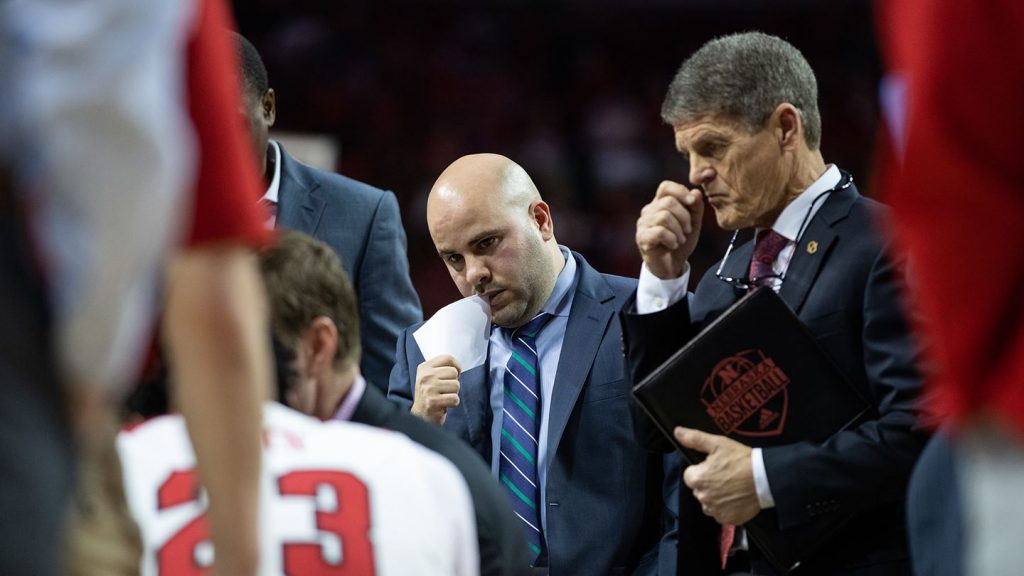 Matt Abdelmassih (center) is featured on ESPN.com as one of the "40 Under 40" List. (Photo - Maddie Washburn/Nebraska Communications)

Lincoln – University of Nebraska assistant Matt Abdelmassih was recognized by ESPN as one of the top young coaches in the country, as the website unveiled its “40 Under 40” list Wednesday morning.

ESPN college basketball writers Myron Medcalf, Jeff Borzello and John Gasaway compiled the list, which attempts to rank coaches according to both achievements and potential. Abdelmassih is No. 22 on the list, which includes head coaches and assistant coaches.

Abdelmassih was instrumental in helping turnaround the Iowa State and St. John’s programs before reuniting with Fred Hoiberg at Nebraska in April of 2019. Abdelmassih’s first class at Nebraska, which was put together in just over a month, was the Huskers’ second-best class of the Big Ten era. His 2020 recruiting class features as a pair of transfers in Trey McGowens (Pittsburgh) and Kobe King (Wisconsin) who are among the top 11 transfers in the country this offseason, while junior college transfers Teddy Allen and Lat Mayen are listed as two of the top 20 recruits nationally by JUCORecruiting.com

During his tenure at St. John’s, Abdelmassih recruited the majority of roster for the Red Storm, including the starting lineup for the 2018-19 squad which won 21 games and reached the NCAA Tournament. He recruited three freshmen who were Big East All-Freshman Team selections, while adding transfers who were major contributors.