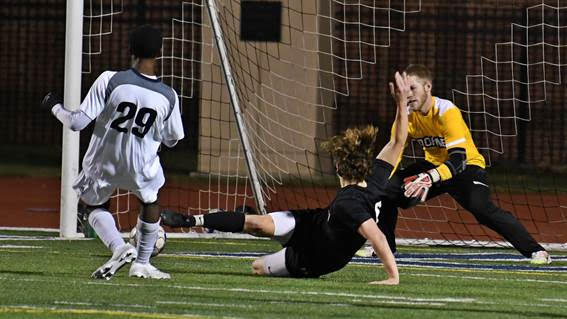 SEWARD, Neb. – The layoff of more than 10 days did not stop the Concordia University Men’s Soccer team from getting out to a big first-half lead as it returned to action by hosting Doane on Wednesday (Oct. 28) evening. Three Bulldogs got on the board with their first goals of 2020 in a 5-1 victory over the conference rival from the southeast. Concordia played for the first time since a home loss to Hastings on Sept. 17.

These were three GPAC points the Bulldogs needed in their pursuit of another lofty GPAC placement. Thirteenth-year Head Coach Jason Weides’ squad moved to 7-2-1 overall and to 5-1-1 within the conference.

“We handled it really well. Certainly a week-and-a-half layoff is unique,” Weides said. “I don’t think we’ve ever had that before. With any postponement, they handled it well. It gave us an opportunity to really get back to some of the basics. The last week of practice was really good for us and guys were competing and working at a better level.”

Going back throughout much of Weides’ tenure, the Concordia-Doane series has been ultra-competitive, but the Bulldogs have now won back-to-back meetings by margins of three goals or more. In this particular matchup, Weides called upon a number of players who were impressive in recent training, including junior Daniel Campbell. He found the back of the net in the ninth minute to open the game’s scoring.

Campbell and Mauro Figueroa were inserted into the starting lineup – and it worked. Campbell notched a goal and an assist and Figueroa also produced a goal and an assist. There were contributions all around for a Concordia side that dominated a Tiger team coming off a 4-2 win over Dordt. The Bulldogs finished with an advantage of 15-8 in the shot column.

“Tonight we had some guys get in the lineup that maybe hadn’t played a lot or hadn’t started this season,” Weides said. “A couple of them were on fire this last week-in-a-half in training. Danny Campbell and Mauro were really playing at a top level. They came out here and did the same thing. They were really big contributors in that first half.”

More than anything, Campbell is just glad to be back out there playing again. Said Campbell, “After being injured for over a month and having to wait to get back into the swing of things, it felt really nice to start off the night with a goal and get the team rolling like that.”

Campbell (9’), Figueroa (11’) and freshman Braden Spath (45’) each got on the board with their first goals of the season. Then in the final 10 minutes of play, Isaiah Shaddick and Ryan Wokutch joined in with a goal apiece to add the exclamation mark. Shaddick assisted the goal to Wokutch, which occurred in the last minute of action.

Only when the game was well in hand did Doane (3-5, 3-5 GPAC) really get much going on the attacking end. The Bulldogs were solid defensively in front of goalkeepers Andrea Simonetti Federico and Santiago Esparza. Doane managed just four shots on goal. The Tigers have not beaten Concordia since 2012. Concordia’s series record since then is 6-0-4.

In a rescheduled matchup, the Bulldogs will be at Presentation (0-5 GPAC) for a 1 p.m. CT kickoff on Saturday. In the first two meetings as GPAC foes, Concordia has outscored the Saints by a combined total of 16-0.