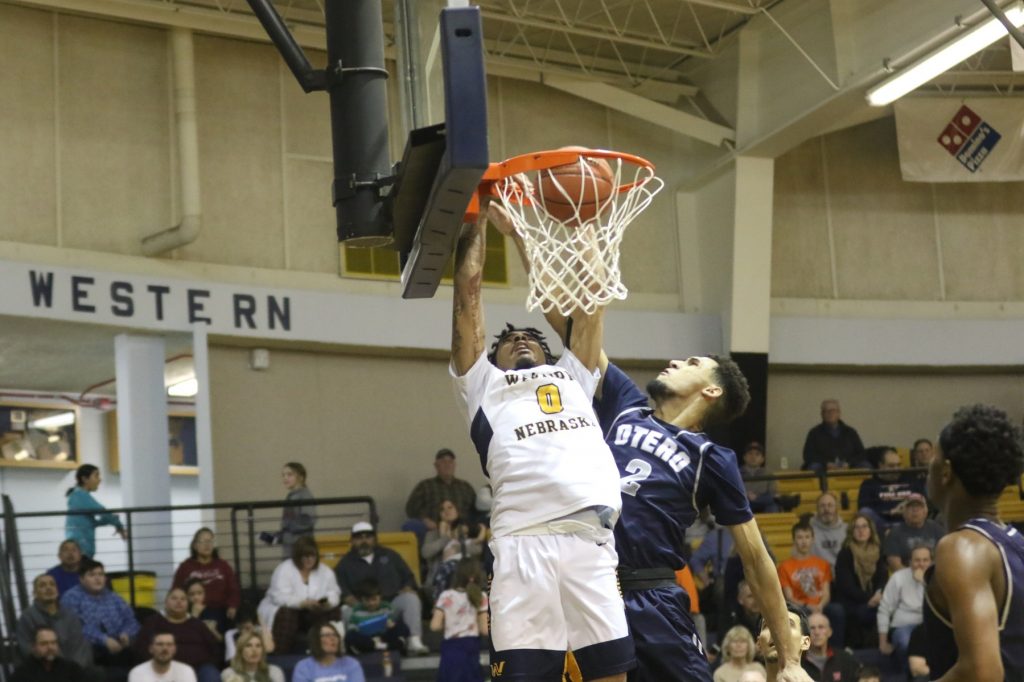 STERLING, Colo. – Teddy Allen scored 45 points and the Western Nebraska Community College overcame a late second half deficit to drop Casper College 112-108 in overtime in the quarterfinals of the Region IX Tournament in Sterling, Colorado.

“As we have been all year, our coaching staff is proud of the players and programs efforts,” WNCC head coach Cory Fehringer said. “Circumstances have not been in our favor too often, yet these seven young men continue to battle with resiliency in their bones.”

It wasn’t easy, either. WNCC was down by 11 points early in the second half and then were facing a 97-92 late but came back to force overtime tied at 97.

“Casper is a talented tea, well coached by a good friend, and made us earn the win,” Fehringer said. “There is more work to be down and our hearts will be tested yet again tomorrow [Friday].”

WNCC advances to the semifinals when they face Northeastern Junior College at 7 p.m. with a berth into the championship game on the line. NJC topped Central Wyoming College 90-68 to advance.

The contest was a back and forth in the first half. WNCC held a 51-49 lead late in the first until Casper banked in a half-court shot to lead by one 52-51.

The game stayed tight until Casper went up 95-90 and later 97-92. The Cougars defense picked up, holding Casper scoreless the rest of the way in the second half. WNCC tied the game with 12.7 seconds to play on a Kalen Williams 3-pointer forcing overtime.

Casper scored first in the overtime, but Jared Rosser nailed a 3-pointer for a 100-99 lead. Casper came right back to hit a bucket. The Cougars then went on a 6-0 run behind a bucket by Elie Cadet and four points from Williams to lead 106-101.

Casper came back to cut the deficit to 107-106, but Williams had a dunk and a foul for the old-fashioned 3-point play for a 110-106 lead with 10.5 seconds to play. Casper hit a bucket with 3.8 seconds, but Allen sealed the game with two free throws with 2.8 seconds to give WNCC the win.

Allen led all scorers with 45 points including hitting three 3-pointers and going 16 of 18 from the free throw line. Williams added 26 points on four 3-pointers while Rosser had 20 points with two treys.