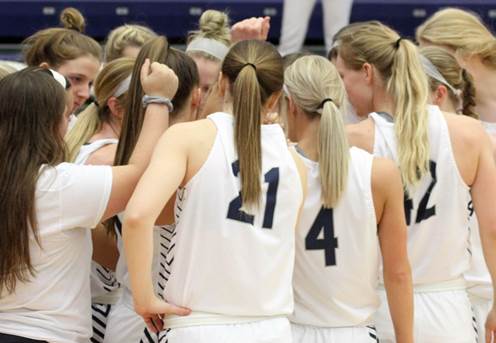 SEWARD, Neb. – Let us take a moment to again marvel at the depth of talent within the Concordia University women’s program. The top-ranked Bulldogs absorbed Briar Cliff’s best shot in the opening quarter and eventually turned Saturday afternoon (Nov. 16)’s affair into another runaway victory. Concordia drained 19 3-point field goals in what amounted to a 113-59 destruction of the Chargers inside Walz Arena.

Fourteenth-year head coach Drew Olson’s squad has reached the 100-point mark for the fourth time this season. The Bulldogs remain undefeated at 6-0 (2-0 GPAC).

“I thought Briar Cliff was great the first half. They played really well,” Olson said. “They handled the pressure, they hit some shots and they even had the lead a couple times in that first half. It was good for our kids to get challenged. I thought they responded really well in the second half.”

Briar Cliff (1-4, 0-1 GPAC) did not appear at all intimidated in the early going. Alyssa Carley knocked in a 3-point shot in the final minute of the first quarter to provide her side a 21-20 lead after one period. Concordia then took a somewhat modest (by its standards) 14-point lead to halftime. Unfortunately for the visitors, the triples that weren’t falling for the Bulldogs (2-for-20 in the first quarter from beyond the arc) started pouring in at a dizzying rate.

Concordia racked up 65 points in the second half while spreading the production up and down the roster. Six Bulldogs scored in double figures: Taylor Farrell (14), Delani Fahey (13), Taryn Schuette (12), Grace Barry (11), Philly Lammers (11) and Claire Cornell (10). Cornell had all of her points in the first half in combatting the early energy brought to town by the Chargers.

As if Concordia really needed another weapon, Farrell emerged on Saturday. The Millard West High School product canned 4-of-6 tries from long range – emphasis on the word ‘long.’ That’s not by accident. Farrell has been working on chucking it from the cheap seats.

“My teammates knew I was on and they got me the ball as best as they could,” Farrell said. “I couldn’t have done it without my teammates. I just knew I needed to step up and hit shots.”

Farrell, Fahey (4-for-9) and Schuette (4-for-9) each knocked down four 3-point field goals. Despite the early offensive struggles, the Bulldogs wound up shooting 46.6 percent (41-for-88) from the field and 35.2 percent (19-for-54) from beyond the arc. Concordia had plenty of opportunities for extra shots by way of forcing 40 turnovers and grabbing 18 offensive boards.

Throughout the second half, the Bulldog ball movement was superb. Barry collected nine assists while just missing a double-double. MacKenzie Helman dropped eight dimes and Rylee Pauli dished out four assists. In a hyper up-tempo game, Concordia had only 15 turnovers.

The numbers have been downright silly so far. The Bulldogs have won games already this season by margins of 57, 78, 61 and 54, respectively. This stretch has allowed Olson to see exactly the entire roster for extended minutes.

“We’re learning a few things with X’s and O’s and also the mental approach of coming into every game,” Olson said. “It’s good for us and hopefully we keep getting better.”

The Bulldogs will be at home for the fifth-straight outing when they host College of Saint Mary (1-5, 0-2 GPAC) at 7 p.m. CT on Wednesday. Concordia won both of last season’s meetings with the Flames by comfortable margins – 88-55 in Omaha and 95-51 in Seward. College of Saint Mary has dropped GPAC games against No. 19 Morningside and No. 11 Northwestern to begin this season.