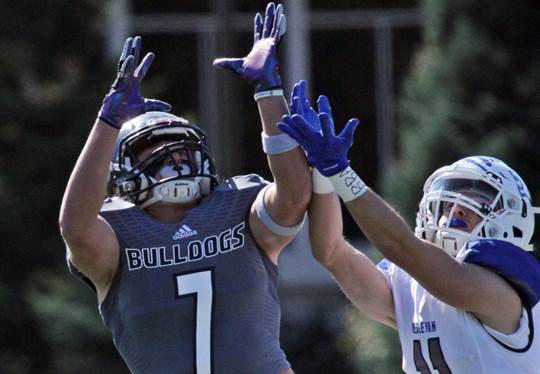 SIOUX CENTER, Iowa – The Concordia University football team already knew it had its work cut out for it while up against the top-ranked rush offense in the nation. The high-powered Dordt ground attack took advantage of plenty of short fields on Saturday (Oct. 26) afternoon and put a thumping on the visiting Bulldogs, 35-0, in Sioux Center, Iowa. The contest marked the fifth-straight year that Concordia has played the Defenders on the road.

Head coach Patrick Daberkow’s squad had not suffered a defeat quite like this one this fall. All four of its previous defeats had been decided by margins of a touchdown or less. The Bulldogs have slipped to 3-5 overall (3-4 GPAC).

“These are very hard lessons to learn,” Daberkow said in the postgame show with 104.9 Max Country. “We have some address some things with each position group. We’ll own our mistakes and learn from it. We hope this helps mold guys down the road and learn things. It’s hard to find a silver lining in this. We just have to get back to the drawing board and play better next week.”

The miscues in the first half gave Concordia little shot of bringing a victory back home. Jake Kemp was picked off three times and the Bulldogs fumbled away a kickoff. Other than being stuffed on a fourth down try in Concordia territory, Dordt (5-3, 4-2 GPAC) could not have scripted much better of an opening 30 minutes. It was 28-0 by the time the break mercifully arrived.

The Defenders made the Bulldogs pay with a run-oriented offense that piled up 269 rushing yards. The onus was placed upon a Concordia defense that was on the field for 89 plays. In the first half, Levi Jungling, Carter Schiebout, Michael Sonderman and Levi Schoonhoven all rushed for a touchdown apiece. Schiebout powered his way to 101 yards on 19 carries. Dordt had to work for its 379 total yards. It did not have a play go for longer than 18 yards all day.

On the other side of the ball, Concordia managed only 170 yards and 11 first downs. It put together its best drive on the game’s final possession when it marched 53 yards to the Dordt eight-yard line. The Bulldogs eventually ran out of time with a Wyatt Ehlers incompletion occurring on the very last play of the afternoon.

The big disadvantage early on led to a pass-first Bulldog offense that attempted 33 throws compared to 21 rushes. Kemp was 9-for-24 for 89 yards with four of his tosses being picked off. Ryan Durdon ran seven times for 30 yards with a long of 17. Brady Fitzke caught three passes for 47 yards. Concordia turned it over six times.

Defensively for the Bulldogs, safety Peyton Mitchell notched his fifth interception of the season while Derek Tachovsky piled up a team best 12 tackles (including two for loss). Tachovsky and the defense spent 38:28 of game time on the field.

“It’s a very unique offense,” Daberkow said of Dordt. “It’s a very well-oiled offense. They do a good job and they have a good thing going right now. If you turn the ball over against an offense like that and give them that many extra opportunities, you’re not going to be in the game. That’s what we saw today.”

Up next is the home finale for the Bulldogs, who will welcome Midland (4-4, 3-3 GPAC) to town next Saturday (Nov. 2) for a 1 p.m. CT kickoff. Concordia will use the day to honor its senior class during pre-game festivities. The Warrior coaching staff includes former Bulldog head coach Vance Winter, now the defensive coordinator at Midland.