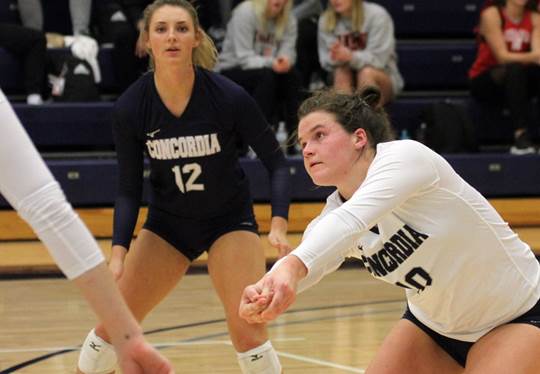 JAMESTOWN, N.D. – Both teams knew the prize at stake on Wednesday night (Nov. 13) – a chance to stage the GPAC tournament championship match. In the end, host and eighth-ranked Jamestown played a bit cleaner than the 15th-ranked Concordia University volleyball team. The Jimmies sent away the Bulldogs, 18-25, 25-16, 25-15, 20-25, 15-13, in the semifinals of the conference tournament played inside Newman Arena in Jamestown, N.D.

Head coach Ben Boldt’s squad has been eliminated from the GPAC tournament, but that does not mean the season has ended. At 23-6 overall (third place in the GPAC), Concordia has reason to believe it will be one of 44 teams chosen for the NAIA national tournament field.

“I’ve certainly been super proud of our team this year,” Boldt said in his postgame interview with 104.9 Max Country. “They can do some great things when they look each other in the eye and say, ‘Hey, I’m gonna go to battle with you.’ I really felt that (tonight), especially late in the match. Sets four and five are what I expect from our team.”

Based on the five-set match that unfolded between these two GPAC combatants inside Walz Arena on Oct. 31, no one should have been surprised that this was another pulse-pounder. After being outplayed in the second and third sets, the Bulldogs showed the type of grit they have relied upon all season. The Concordia attack produced 21 kills and hit .400 in the fourth set. In that stretch, Kalee Wiltfong (six), Kara Stark (five) and Emmie Noyd (four) each recorded four or more kills.

For anyone with a dog in the fight, the fifth set was stomach turner. Neither team held a lead of more than two points. After falling behind 12-10, setter Tara Callahan facilitated a kill apiece for Noyd and Stark to tie it up, 12-12. Ultimately, Jamestown happened to be two points better. Britta Knudson blocked Wiltfong for match point. The Bulldogs went back to Wiltfong after she slammed their 13th point of the set.

“I told them in the huddle after the match was over that I was proud of them for being resilient after sets two and three,” Boldt said. “You could see what our team was made of there. Obviously our teams are very evenly matched and we competed all the way through the end. It comes down to an inch here or there. We need to own it and just get better from it. That’s the way life goes sometimes. As long as we get better from it, that’s the lasting message.”

Concordia knew it had to adjust from the previous meeting that saw Jamestown record 18 blocks. The Bulldogs were better in this department on Wednesday, but they were still out-blocked, 10-5. There was also a significant difference in errors with Concordia committing 36 of them on attacks and 10 of them in service. The Jimmies outhit the Bulldogs, .209 to .156.

For Jamestown, Corina Ruud enjoyed a nice night that included 12 kills and a .524 hitting percentage. Isabell Wedell was in on eight of the team’s 10 blocks. The Jimmies (28-4) will host eighth-seeded College of Saint Mary in the GPAC championship match at 7 p.m. on Saturday.

The Bulldogs now wait until 10 a.m. on Monday (Nov. 18) to learn their national tournament fate. For information on the NAIA’s selection shows, click HERE. The NAIA Volleyball National Championship features 44 teams, 24 of which begin the national event at opening rounds. The final site is the Tyson Events Center in Sioux City, Iowa.