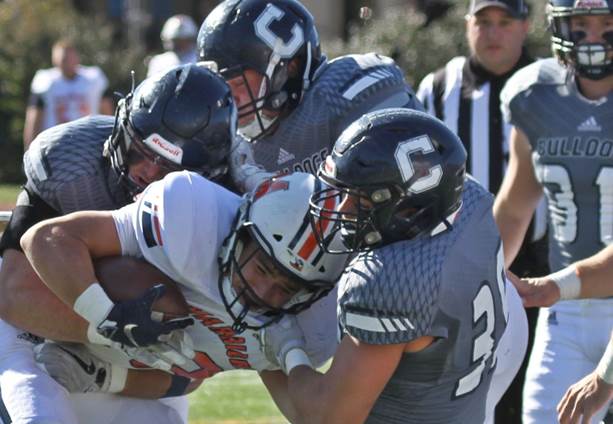 SEWARD, Neb. – The turnovers have mounted for an offense that has continually put the Bulldog defense in tough spots. Frustrations from Dordt last week carried over as the Concordia University football team sputtered in a 27-7 loss to Midland in the 2019 home finale on Saturday (Nov. 2). The Warriors put up the game’s final 20 points.

Third-year head coach Patrick Daberkow had hoped to send a class of 18 seniors out with a victory. Unfortunately, the Bulldogs fell for the third-straight game and slipped to 3-6 overall (3-5 GPAC).

“My goodness we love our seniors,” Daberkow said. “What hurts the most today is sending them out (with a loss). We have some absolute warriors on our team that have just been plugging away for four or five years. I really wanted to send them out with a win. It’s just very disappointing when that doesn’t happen.”

The lasting positive Concordia will take away from this fall is the never-ending grit shown by a defensive unit spearheaded by the linebacker core. On this particular Saturday, all four starting linebackers registered at least six tackles, led by a dozen from senior Derek Tachovsky. Junior Lane Napier and senior Zac Walter added 10 stops apiece. In the secondary, OJ Ferguson and AJ Jenkins both plucked an interception.

The quarterbacks on both sides threw the ball up for grabs throughout the day. Midland (5-4, 4-3 GPAC) intercepted Jake Kemp four times, although it converted those opportunities into only seven points. Unlike a week ago when the Defenders took advantage of short fields, the Warriors put together three touchdown drives of 75 yards or more. They outgained the Bulldogs, 418-263.

Midland quarterback Noah Oswald connected with Austin Harris on separate touchdown plays of 21, 37 and 16 yards. Late in the fourth quarter, Maximus Wold put the game on ice by capping a 13-play, 80-yard drive with a seven-yard touchdown rush. The Warriors actually found some success running the football against Concordia’s top-five rated rush defense. They averaged 5.0 yards per carry and gained 224 yards on the ground.

The Bulldogs were unable to generate enough offense to give themselves a shot. Not only did it commit four turnovers, Concordia went just 2-for-14 on third down attempts and Kemp was sacked eight times. It also went without running back Ryan Durdon, whose career was cut short by an injury suffered in practice. Even with Durdon, the run game had been a work-in-progress. On Saturday, Jonah Weyand and Devin Zeigler split carries with modest results. The Bulldogs finished with 48 rushing yards.

The first half was closely contested. Concordia got its only score of the day at the 8:52 mark of the first quarter when it cashed in on a muffed Midland punt. On the very next play, Kemp scampered his way into the end zone from 18 yards out to tie the game, 7-7. The Warriors regained the lead for good in the final minute of the first half.

By the end of the afternoon, the Bulldogs were again left searching for answers in what has turned into another season of learning. The defense has been a strength for most of the fall, but the offensive side of the ball must become much more productive moving forward.

“Huge impact,” Daberkow said while expanding upon the senior class. “A lot of those guys set the example for work ethic in the weight room. This was a game where we couldn’t run the football as well as we wanted to and they really grinded us out in the fourth quarter. We need to get bigger and stronger. If we all work the way these seniors did, we’ll get a lot better this offseason.”

The 2019 season will end next Saturday (Nov. 9) with a trip to Sioux City, Iowa, for a matchup with top-ranked Morningside (8-0, 7-0 GPAC). The defending national champion Mustangs have again been dominant within conference play and have scored at least 42 points in each game this season. Concordia last defeated Morningside in 2003.