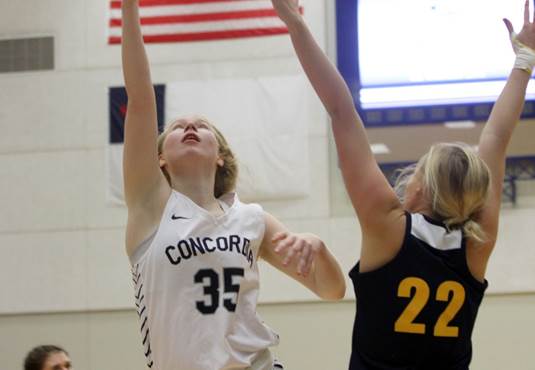 SEWARD, Neb. – The contest that unfolded on Wednesday (Nov. 20) turned into a patented Concordia University women’s basketball blowout. The top-ranked Bulldogs rattled off the game’s first 11 points and put the game out of reach early while up against visiting College of Saint Mary. The Flames were flustered into 37 turnovers in what amounted to a 127-51 final score. The point total re-broke the school record that had been set earlier this season.

Fourteenth-year head coach Drew Olson’s squad cracked the 100-point mark for the fifth time in seven outings. Only one opponent has challenged Concordia on the way to its 7-0 start (3-0 GPAC).

Said game high scorer Elsie Aslesen, “It’s just awesome. I love playing for this team because so many different people step up all the time. Just the diversity in our team makes us really tough to guard. I feel like teams have a really hard time preparing for us because you never know who is going to go off.”

It’s been a 15-person party just about every time out for the Bulldogs, who had 12 players notch seven or more points for the evening. Senior Riley Sibbel had the hot hand in the opening half when all 12 of her points went on the board. Plenty of others took their turn. Concordia very nearly reached 100 points before the third quarter concluded.

Insert your own superlative here about the crazy scoring totals that keep lighting up the scoreboard for the defending national champs. No team in program history has ever averaged more than 87.1 points per game in a season. Challenging GPAC matchups lie in wait, but this is something else. The Bulldogs have thrived despite Taylor Cockerill’s absence by deploying their tremendous depth.

What has made this Concordia so devastating, beyond its usual press and frenetic pace, has been its shooting. The Bulldogs went 15-for-40 (.375) from 3-point range on Wednesday. Players like freshman Taylor Farrell are unafraid of chucking it from very deep. On this particular night, Delani Fahey and Mackenzie Koepke both knocked down three treys.

Concordia has remained focused and motivated during this stretch of lopsided wins. Said Aslesen, “It’s just the love to play basketball. We have fun doing it whether we win or lose.”

The Bulldogs will break from regular-season action for an exhibition contest on Saturday at NCAA Division II Metropolitan State University of Denver (0-4). Tipoff time is set for 1 p.m. MT / 2 p.m. CT. GPAC play will continue next Tuesday (Nov. 26) with a matchup at No. 19 Morningside (6-1, 3-0 GPAC).

Cattle Call looks at potential for higher cash for cattle