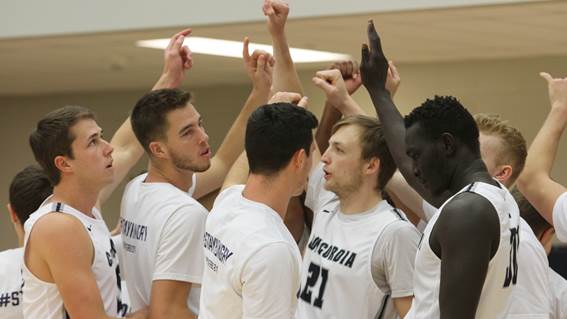 Head coach Ben Limback’s squad has won six games in a row, including five-straight by double-digit margins. Concordia (13-5, 6-4 GPAC) has climbed all the way into a tie for fourth place in the current GPAC standings.

“We had great balance with T-Shuck, Brevin (Sloup) and Carter (Kent),” Limback said. “Justin (Wiersema) made some plays and obviously Sam (Scarpelli) too. This team is unselfish and it shows at the offensive end … even the shots we missed I thought we had some great looks from three.”

The Bulldogs may not have closed this one out as strong as they would have liked, but the 23-point second half lead they built up was too much for the Jimmies (12-7, 3-6 GPAC) to overcome. The bad news for opponents: Shuck is hot again. He nailed three treys and was effective in finishing at the rim. The Grand Island native also grabbed seven rebounds and swiped three steals. Shuck poured in 17 points in the second half alone.

Scarpelli put on a shooting display in the first 20 minutes, burning Jamestown with four long balls. He added another triple in the second half to bring his final total to 15 points. This offense is clicking. The Bulldogs shot 52.4 percent overall and went 11-for-27 (.407) from beyond the arc. Kent (17), Sloup (14) and Wiersema (10) also hit double figures. The team’s top five scorers combined for all but four of the 86 points.

“We have a sense of urgency every day in practice and especially in games,” Shuck said. “The first half of the season we kind of struggled to finish games. We really found out how to stay together, keep that intensity and finish out second halves better. We’ve made a lot of improvement. That’s a big part of our winning streak.”

On the defensive end, Concordia kept Jamestown’s starting five in check. That group combined for 39 points. However, the Jimmies got a big boost off the bench from Brady Birch, who notched a double-double with his 28 points and 10 rebounds. Jamestown owned a 40-32 advantage on the boards, but it was minus-four in turnover margin. The Jimmies were winners of the 2019 GPAC tournament.

Shuck’s return to form has been a huge factor for the Bulldogs. Over his last three games, Shuck has averaged 18.7 points and has gone 8-for-18 from 3-point range. Said Limback, “He was huge. He made some tough shots inside. The kid can play. He’s a really gritty player and a great captain and leader on this team.”

The active six-game win streak features four victories over GPAC opponents: No. 19 Northwestern, Dordt, Hastings and Jamestown. Concordia has improved to 7-2 at home this season.

The Bulldogs will now have a bye in the middle of this coming week before heading to Briar Cliff (11-8, 2-7 GPAC) next Saturday (Jan. 18) for a 4 p.m. CT tipoff in Sioux City, Iowa. Concordia will attempt to avenge a 70-69 home loss to the Chargers that came on a buzzer beating trey on Nov. 16.