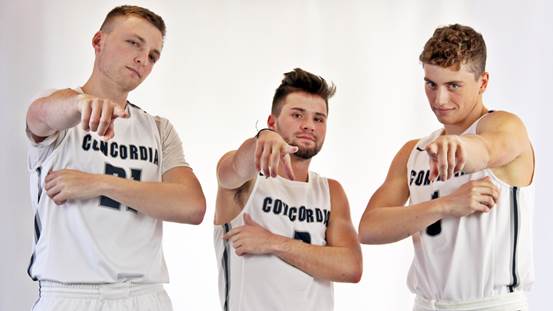 SEWARD, Neb. – The Concordia University men’s basketball team has found a new lease on life in 2020. The Bulldogs again surged on the offensive end while turning away Dordt, 91-79, inside Walz Arena on Saturday (Jan. 4). Sophomore Carter Kent has also taken well to the new year. He totaled 25 points for the second-straight game.

Head coach Ben Limback’s squad put together a fine week of play that also saw it emerge from Northwestern with an 88-65 victory over the 19th-ranked Red Raiders. Concordia has run its record to 11-5 overall and back to .500 within the conference (4-4).

“That second half I thought we played harder and offensively we were moving it better,” Limback said. “I thought we made our runs when our defense led into our offense. That’s what we’ve been doing when we’ve played well this year. We certainly did that in the second half.”

The Defenders took a 47-39 lead to the half and led by 10 points early in the second half. They just couldn’t stop the onslaught that was about to hit it. Kent and company sizzled over the final 20 minutes by shooting 54.8 percent (17-for-31) from the floor and by going 10-of-18 from 3-point range. Things usually go well when ‘the big three’ scorers are on their game. In addition to Kent’s 25 points, Tanner Shuck canned 17 and Bevin Sloup knocked in 16.

The Bulldogs are now doing something they failed to do in one-point losses to both Briar Cliff and No. 1 Morningside – finish. Concordia turned a tight 75-72 lead in the last four-and-a-half minutes into a fairly comfortable win by closing it out with a 16-7 run. Kent did the honors of drilling the backbreakers. He struck for a trey apiece at the 3:15 and 2:48 marks to push the lead to 12 (84-72).

Kent just may have taken over the role as the team’s primary weapon. He now leads the team in scoring at 14.8 points per game. Said Kent, “I think (our success) has been due to our ability to stick together through tough times. Some of those games before Christmas break didn’t really go the way we wanted. We just stuck together and knew that at some point the hard work is going to pay off. We’re just clicking right now.”

The lineup most frequently employed by Limback also features sophomore guard Justin Wiersema, who displayed some nice passes in transition. He dropped eight dimes to go along with seven points. Shuck’s return to form was a welcome sight. The Grand Island native was one of three Bulldogs to drop in three treys. Off the bench, Ryan Holt (seven points, four rebounds) and Gage Smith (six points, six rebounds) supplied solid minutes.

Named GPAC Freshman of the Year last season, Kent is on track to do some special things. He added three blocks, three steals and three assists to his Saturday stat line. Said Limback, “Carter is tremendous. We talk about finishing strong (at the rim) and he certainly did that. It was fun to see Tanner Shuck come to life in the second half. I’m just proud of our guys. There were a lot of moments were they got some buckets, but we were able to sustain their runs.”

Dordt (13-5, 5-4 GPAC) is among the teams receiving votes in the national poll. The Defenders had won three-consecutive GPAC games before running into Concordia. Even in defeat, 6-foot-7 Garrett Franken proved to be a handful. He notched 20 points and 11 rebounds. Zach Bussard chipped in with 14 points off the bench.

The Bulldogs will shoot for a fifth win in a row on Wednesday at Hastings (9-9, 2-6 GPAC). Tipoff from Lynn Farrell Arena is set for 8 p.m. CT.