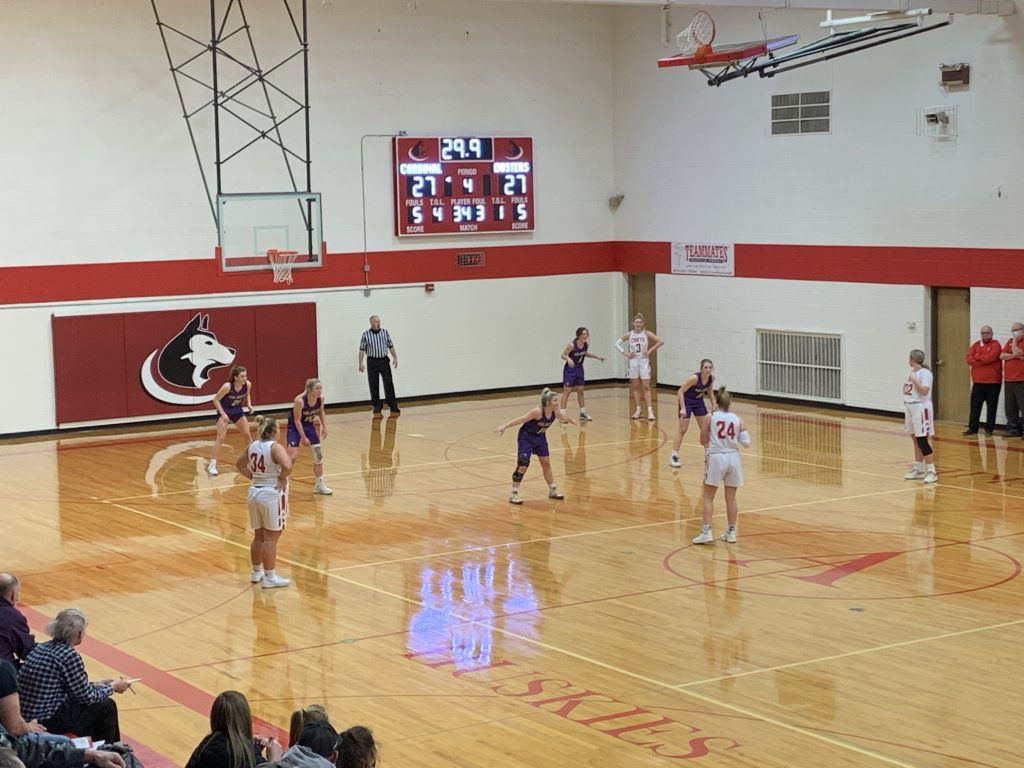 AURORA – The opening game of the semifinal round of the Girls Central 10 Conference Tournament lived up to the billing as the #5 seeded Holdrege Dusters faced off against the #1 Crete Cardinals for a chance to play in the Central Conference Tournament title game. Both teams played a tough, gritty, defensive contest as Crete escaped with a free throw with 3.4 seconds to go from Leah Jurgens to win 28-27. Click here to listen to the broadcast.

Holdrege entered the contest with a days rest, having traveled to Columbus Lakeview on Wednesday night to play in a doubleheader with the boys contest, earning a victory 46-37 over the #4 seeded Vikings. Crete however played the previous night on Thursday at home, edging Seward 57-53. The early rest didn’t give any advantage to the Dusters as Crete was able to start on the right foot getting their first possession score against Holdrege as Lexi Mach received a pass inside to attack the basket and get a bucket. The Dusters then took sometime to get their offense going, as Crete’s 6-1″ freshman Marin Rasgorshek gathered her first points and Crete led early 5-0 after a free throw connected by Mach. Crete added another lay-in from Jurgens with their largest lead of the night at 7-0, until Holdrege hit a three pointer from the wing coming from Alexis Bliven. The Dusters clawed back with free throws coming from Mallory Pfeifer and McKenna Ortgiesen, and as the first quarter ended Holdrege had wen on a 6-0 run to trail 7-6.

The second quarter started with more defensive showdowns, as Holdrege was content to let Mallory Pfeifer gather points from the free throw line going for 2 points from the charity stripe and adding a lay in as well. Bliven added her own 2 with Ortgiesen cashing in a free throw, while Crete was held to only 3 points in the quarter. Holdrege led into halftime 13-10.

The Lady Dusters then continued to feed Pfeifer inside as she quickly attacked the basket on lobs coming from Taylor Wiser, with Pfeifer scoring 5 in the quarter. Jurgens hit a three pointer that switched momentum briefly for the Cardinals, as Rasgorshek added her own turnaround jumper and Hannah Newton scored as well to keep the game within one possession ending the third quarter 19-17 as the Dusters led entering the fourth.

Holdrege had not trailed since the middle part of the second quarter, but immediately out of the quarter change Holdrege was snuffed on their opening quarter possession and Newton cashed a three pointer to take the Crete lead 20-19. Mach then used the same play from the opening minutes with a foul to make the lead by 5 for the Cardinals, the largest lead since the first quarter for either side.

Holdrege would respond with a bucket but Crete added another, having their lead 26-21 with less than 5 minutes remaining. The Dusters came back with a much needed three pointer from Bliven bringing the game within one possession 26-24. After a free throw hit by Crete, McKenna Ortgiesen nailed a three pointer to tie the game at 27 with over a minute to play. Holdrege then settled defensively as Crete elected to burn a minute off the clock and take a timeout with 24 seconds remaining until the Cardinals took a timeout and responded with an offensive set.

Crete attacked the three point line first, and after a miss, gathered an offensive rebound with a putback that missed as well, but Jurgens underneath the basket received another offensive board and attempted a lay-in but was fouled on her shot. With 3.4 seconds to go, Jurgens missed the first free throw, but then connected on the second and Holdrege could not get a clean look past halfcourt as they fell in the final moments 28-27 at Aurora High School.

The Crete Cardinal will face Northwest in the championship game. The Cardinals improve to 15-2 and had contributions from Jurgens and Mach with 8 points each, 7 points tallied by Rasgorshek, and 5 points added by Newton.

The Holdrege Dusters fall to 9-7 on the season and face York for third place in the Central Conference tournament game. The Dusters had contributions from Pfeifer with 12 points, 8 points tallied by Bliven, and 7 added by Ortgiesen.