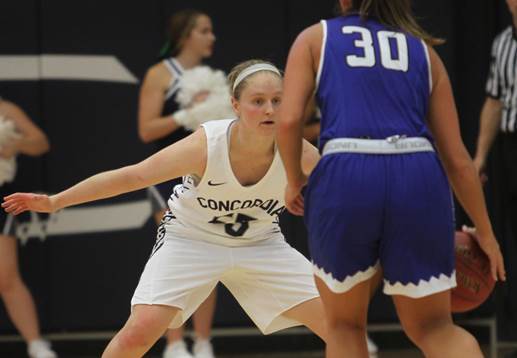 SEWARD, Neb. – The challenge the top-ranked Concordia University women’s basketball team received on Saturday (Dec. 7) figures to serve it well as it pursues another special season. The Bulldogs found themselves trailing by 17 points in the opening quarter while hosting fierce rival and 13th-ranked Dakota Wesleyan. Concordia’s press eventually wore on the Tigers in what amounted to a 100-72 win for the home team.

Fourteenth-year head coach Drew Olson’s program has won for the 57th time in its last 58 home games. The Bulldogs remain undefeated at 9-0 (5-0 GPAC).

“I was really proud of our kids for how for how we responded,” Olson said. “That first quarter it felt like they hit a whole bunch of shots. Defensively we weren’t very good and I thought we kind of panicked for a little bit. After the first quarter we regrouped and got our composure back. We played really good basketball for three quarters.”

This game featured a 46-point swing from Dakota Wesleyan’s sizeable early lead to Concordia’s largest advantage of 29 points. If ever there would be a game where the Tigers (8-3, 3-3 GPAC) would feel the graduation of former point guard Rylie Osthus, this was it. The Bulldogs shot a rough 5-for-22 from the floor in the first quarter, but the havoc they created (41 turnovers) made life miserable for Dakota Wesleyan.

It would have been hard to forecast such a rout when the Tigers made such considerable noise in the opening quarter. They also took a 43-42 lead to halftime after star Kynedi Cheeseman drilled a long buzzer beater. Things unraveled quickly for the visitors in the third quarter. A key sequence came when Concordia converted two turnovers into a trey apiece from Mackenzie Koepke and Riley Sibbel to make it a 62-51 advantage. The Bulldogs held a double-digit lead the rest of the way.

Concordia certainly had the better of the point guard play with Grace Barry again wowing the crowd. She added to her highlight reel with a behind-the-back feed to Philly Lammers on the break as part of the onslaught after halftime. Barry finished with a game high 18 points while adding five assists and two steals. Lammers (13 points and nine rebounds) just missed a double-double and swiped four steals.

“We got a little frantic in that first quarter,” Barry said. “We came together as a team and talked about what we wanted to do on defense and what we needed to do on offense. We just settled down and played our game and that was such a big difference from that second quarter and the rest of the game.”

The score over the final three quarters was Concordia 88, Dakota Wesleyan 45. That meant the fourth quarter turned into a battle of the benches – and the Bulldogs don’t lose that battle. Concordia got 42 points from its reserves, including eight from Delani Fahey. Chloe Schumacher sank two free throws in the final seconds to put the Bulldogs right at the century mark – something they have achieved seven times this season.

Mackenzie Koepke (11 points, 3-for-5 from 3-point range) represented Concordia’s third double-figure scorer. On the other side, Cheeseman topped the Tigers with 17 points. She also was tagged with eight turnovers. Matti Reiner came off the bench to chip in 15 points.

Barry and company remain intensely motivated even after winning a national title back in March. Says Barry, “I think the No. 1 thing is we all love each other and we have a really awesome family dynamic. The second thing is we just love to win. We love winning we love playing together.”

The Bulldogs will be on the road on Wednesday for a makeup game at No. 8 Morningside (8-2, 5-1 GPAC). Tipoff from the Rosen Verdoorn Sports Center in Sioux City, Iowa, is set for 6 p.m. CT. The lone Mustang loss within conference play came at home against now sixth-ranked Hastings.