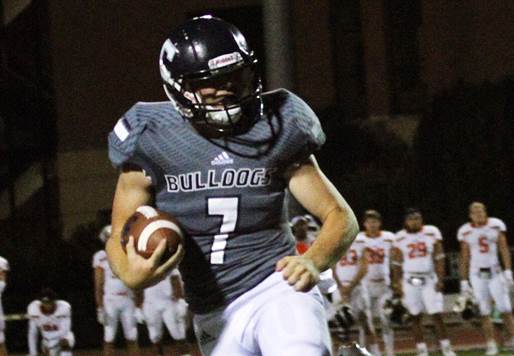 STORM LAKE, Iowa – This will be remembered as the heartache in Storm Lake. Despite a 24-0 lead at the halftime break, the Concordia University football team walked away from Lamberti Recreation Center wondering how it let this one slip away. Josh Lange’s touchdown reception with 37 seconds left in the game completed the 27-24 comeback victory for host Buena Vista University (Iowa) on Saturday (Sept. 14) evening.

Head coach Patrick Daberkow’s squad is now 0-2 with a pair of losses that saw the Bulldogs surrender fourth quarter leads.

The two halves could not have been more different. In the first 30 minutes, Centennial High School product Wyatt Ehlers tossed a touchdown pass apiece to Art Anderson and Korrell Koehlmoos (both covering exactly 45 yards) and linebacker Zac Walter got loose for a 79-yard interception return for a touchdown. It appeared that Concordia would cruise to victory behind a defense that had been stellar through the season’s first six quarters.

For the most part, the Bulldogs shut down the Beaver ground attack, but the passing game took off with the two-quarterback system of Reyes Lara III and Dylan Laughlin. Together they engineered three second half touchdown drives that each covered more than 75 yards. The rally really picked up steam when Morris Aranda intercepted a pass and ran the ball 30 yards to the end zone with 6:55 left in the contest. Buena Vista trailed just 24-20 after that game changing moment.

Deficiencies in several other key areas cost Concordia, which was flagged with eight penalties for 97 yards and was outgained, 467-363. The Bulldogs had no answer for star Buena Vista receiver Eric Pacheco. He burned Concordia by snagging 10 passes for 226 yards. The productivity through the air made up for the Beavers averaging only 2.7 yards per rush.

All those events made it hard to remember that Buena Vista had begun the game with four-consecutive three and outs. Said Daberkow, “It came down to penalties and execution and we didn’t execute well enough. That’s on us. This is a real hard pill to swallow.”

Jake Kemp got the nod at quarterback on the final offensive series for the Bulldogs after a 44-yard kickoff return by Koehlmoos set them up near midfield. Completions by Kemp of six, four and 21 yards (final pass to Ryan Durdon) put Concordia within range of a potential game-tying field goal. However, Jordan Spilinek (1-for-3 on field goals) missed wide left from 33 yards as time expired.

In his first collegiate start, Ehlers completed 11-of-22 passes for 210 yards and two touchdowns (two interceptions). Cayden Beran topped the receiver group with seven catches for 108 yards. Durdon rushed 24 times for 61 yards. Defensively, Peyton Mitchell also came up with an interception and Shayne Campbell blocked a punt on special teams. Riley Bilstein had two tackles for loss and the defensive line combined for three sacks.

The Bulldogs will be engaged in conference action the rest of the way. Next Saturday (Sept. 21) brings another rivalry matchup with Concordia set to head to Hastings (2-0, 1-0 GPAC) for a 1 p.m. CT kickoff from Lloyd Wilson Field. The Bulldogs will attempt to avenge last season’s 21-13 home loss to the Broncos.

“Sitting at 0-2 with eight games left on the schedule, there’s two ways this season can go,” Daberkow said. “That’s what we preached in the locker room. Everybody involved has to look in the mirror. We definitely can’t let this continue.”