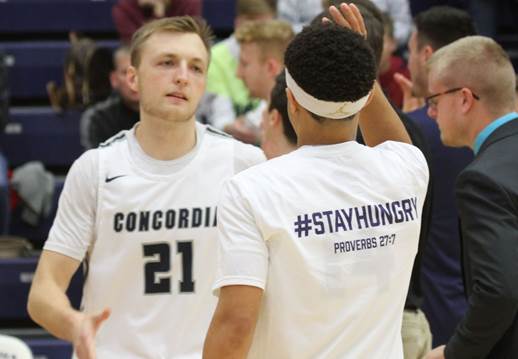 SEWARD, Neb. – The Concordia University men’s basketball team held the lead just about all the way through Saturday (Nov. 16)’s GPAC clash – until the clock read all zeroes. Nick Hoyt stunned the Bulldogs with a game-winning buzzer-beating 3-pointer from the left corner. Visiting Briar Cliff celebrated a 70-69 win in a nail-biter inside Walz Arena.

“I just feel terrible for these guys,” Limback said. “We competed today and (it’s tough) to lose that way. You have to finish down the stretch and make plays. There are going to be things that the coaches, myself and the players look back on, but we have to keep grinding.”

The Bulldogs certainly had their chances to close this game out. On its final offensive possession, Concordia milked the shot clock all the way down and settled for a long step back jumper that misfired. That miss set up the deciding possession for the Chargers, who called timeout with 17.7 seconds remaining. The Bulldogs snuffed out an attempt to drive to the bucket, but Hoyt found enough space in the corner to shoot over a charging Brevin Sloup.

It was a deflating moment for a Concordia team that has made significant strides from a season ago. The Bulldogs were unable to hold what had been an eight-point lead (64-56) with less than 4:30 left in the contest. They had put themselves in position to win with the help of a plus-10 turnover margin and by holding a potent Briar Cliff team to well below its season average of 92.3 points per game.

Unfortunately, this was one of the roughest offensive performances to date for the Bulldogs, who shot 42.9 percent (27-for-63) from the field and 26.1 percent (6-for-23) from 3-point range. Sloup poured in a game high 21 points on 9-for-16 shooting from the floor for a very perimeter-oriented offensive attack.

Briar Cliff (7-0, 1-0 GPAC) remains undefeated in what has been an impressive start behind star Jackson Lamb, who paced his side with 18 points on Saturday. It should be noted that Hoyt also drained a trey to beat the halftime buzzer and cut Concordia’s lead to 40-33 at the time. The Chargers shot 48.3 percent (29-for-60) from the floor and held a 41-28 advantage in rebounding.

“Keep your heads up,” Limback said of his message to the team. “We know we should have made some plays. It’s a good team and we competed with them. We’ve got to get better.”

Sloup was joined in double figures in scoring by Tanner Shuck (16), Chuol Biel (10) and Carter Kent (10). Four of the five Bulldog starters played 36 or more minutes. The lone bench points came on an AJ Watson trey in the second half.

The Bulldogs will break from regular season action next week when they play at NCAA Division II Wayne State College for an exhibition at 7 p.m. CT on Tuesday. The next official game will be at Nebraska Christian College at 4 p.m. next Saturday (Nov. 23).

AUDIO: Marshall Land Brokers And Auctioneers Recognized As One Of The Top Land Brokerage In The US