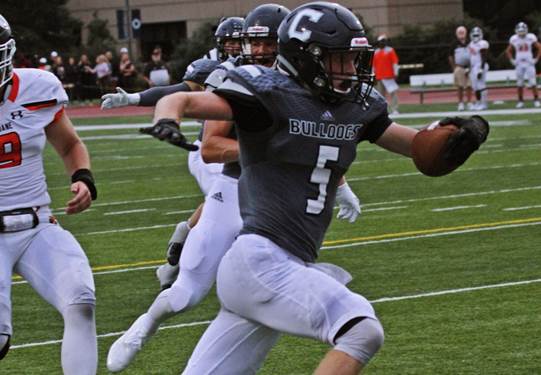 SEWARD, Neb. – A miscue on a punt return and an inability to convert in the red zone were storylines that stood out in the 2019 season opener for the Concordia University football team. The result was a downer for the home team that debuted underneath the Bulldog Stadium lights on Saturday night (Sept. 7). Doane spoiled the evening by rallying back for a 17-10 victory in the first GPAC conference football game of the fall.

There were moments when third-year head coach Patrick Daberkow’s squad showed obvious improvement as compared to the 2018 edition of Bulldog football. Jake Kemp made plays in the passing game and the linebackers are as good as advertised. Still, this one hurts a bit.

“It was tough. Obviously we want to score more points,” Daberkow said. “We didn’t execute in the red zone as well as we wanted to. It just comes down to a play here or a play there. You don’t know which one that’s going to be. That’s why we preach effort as much as we do. Certainly not the outcome we expected tonight. We’ll watch the film and we’ll get better from it.”

There are a number of plays that Concordia wishes it could have back. The Bulldogs missed out on an opportunity to add to a 10-7 lead just before halftime, missed two field goals and twice put their defense in tough spots in the fourth quarter. Doane put up the go-ahead touchdown five plays after a Tiger punt hit a Concordia player and was recovered in the red zone.

Doane protected a lead that grew to seven (on a field goal by Bryce Cooney with 5:50 left in the game) by completely shutting the Bulldogs out in the fourth quarter. Concordia failed to even move the ball into the opposition’s territory in that final 15 minutes. In a last gasp attempt, a sack on third down essentially ended any chance the Bulldogs had of driving for a game tying touchdown.

It left a sour taste for Concordia, which got big time play out of its linebackers. Riley Bilstein (13), Lane Napier (11) and Derek Tachovsky (10) each flew around for double digit tackle numbers. The also combined for six tackles in the backfield. Up front, Aaron Rudloff made his presence felt with a pair of sacks. Together they helped hold Doane to only 282 total yards. The Tigers rushed 34 times for 55 yards.

“Our guys never talk about the position their put in,” Daberkow said. “Our defense talks about just putting the ball down and it doesn’t matter where. I was really proud of the work that they did and the effort they put in tonight … initial reaction was it felt like a really good defensive performance.”

Doane (1-1, 1-0 GPAC) also walked away feeling good about its defense. It stuffed running back Ryan Durdon, who toted the ball 15 times for 19 yards. That meant Concordia had to make some hey in the passing game. Kemp finished 24-of-35 for 262 yards and a touchdown. His frequent targets were Arthur Anderson (nine catches, 100 yards) and Korrell Koehlmoos (seven catches, 97 yards, touchdown). Koehlmoos was on the receiving end of a 26-yard touchdown toss from Kemp in the second quarter.

The Tigers seemed to have found their solution at quarterback with Drake Davidson. In the win, he completed 18-of-29 passes for 227 yards and a touchdown strike. Davidson connected with Izaiah Celestine on a 49-yard touchdown play in the first quarter. Doane had used three different quarterbacks in its 48-7 loss to Ottawa University (Ariz.) last week.

The only nonconference game on the slate will take place next Saturday (Sept. 14) when the Bulldogs visit NCAA Division III Buena Vista University (1-0). Kickoff from Storm Lake, Iowa, is slated for 6 p.m. CT. The two programs met in Seward last season with the result being a 27-20 Concordia victory behind 250 rushing yards from Durdon.