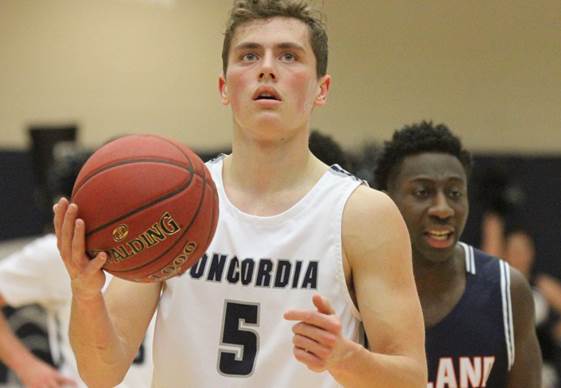 SEWARD, Neb. – Sophomore Carter Kent opened Tuesday night (Nov. 12)’s contest with the type of performance you don’t forget if you witnessed it. Kent put home the first 20 points for the Concordia University men’s basketball team that lit up a first-half fireworks display. Plenty of others got into the act as the Bulldogs rocked visiting Midland, 95-71, in the GPAC opener for both sides.

Concordia is now 5-0 for the first time in head coach Ben Limback’s seven-year tenure. Three of the victories have been extremely one-sided.

“It was two different styles,” Limback said. “They wanted to hammer us inside and get offensive rebounds and we were trying to space the floor. I think we shot well tonight, which always helps all of us look good. Tonight we had multiple guys step up and shoot it with confidence.”

Kent is in the midst of his rise to stardom. He needed only six minutes, 36 seconds to reach 20 points while scoring in a variety of ways. His baseline drive is a thing of beauty. Kent’s early outburst may have had some wondering what the school record point total is (Jon Ziegler had 47 in 2007), but this team likes to share the sugar with its array of weaponry.

The three-ball helped bump a 29-19 first-half advantage into a 45-22 lead. A monsoon of triples offered up by the likes of Kent, Sam Scarpelli, Tanner Shuck and Brevin Sloup during that stretch forced the Warriors to burn four timeous in the first half. For the night, Concordia went 16-for-38 (.421) from downtown and shot 56.5 percent (35-for-62) overall.

Kent finished with a career high 28 points on 11-for-15 shooting from the floor. Please explain yourself, Mr. Kent.

“I was just in the right place at the right time,” Kent said. “There’s nothing special about it. They got me the ball where I was open, and it just worked. It’s important that I wasn’t really looking for mine or anything, but it just happened to be there. If it’s there I’m going to score it, and if it’s not I’m going to pass it someone and they’re going to score it.”

Kent didn’t just score. He also dished out six assists and pulled down five rebounds. The rest of the ‘big three’ also did its part. Sloup dropped in 15 points and had five assists while Shuck chipped in with 13 points and six rebounds.

Freshman AJ Watson then took the baton from Kent in the second half. He buried 4-of-6 tries from 3-point range. Seven different Bulldogs splashed in at least one trey.

Concordia also did a nice job on the other end in holding Midland (2-3, 0-1 GPAC) to 36.2 percent (25-for-69) shooting. Limback lauded Shuck for his work in limiting Warrior star Ryan Williams to seven points on 3-for-12 shooting. Hunter Mengel topped Midland with 21 points off the bench.

It’s early, but the Bulldogs are growing in confidence. Said Kent, “We’re playing together as a team better. In practice we’re working together and not being selfish at all. Each day we’re working really hard. It’s showing. We hang out with each other all the time and we’re all for each other. It’s never about one of us.”

The Bulldogs will face perhaps their biggest challenge yet when Briar Cliff (6-0, 0-0 GPAC) pays a visit to Walz Arena on Saturday. Concordia won the most recent meeting (102-92 score) in a memorable home upset of the then seventh-ranked Chargers, who went on to reach the 2019 NAIA Division II national quarterfinals.